The ad is soundtracked by Queen's classic hit 'Bicycle' 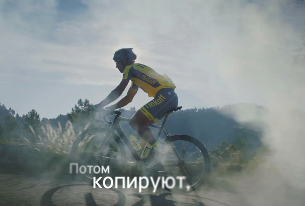 The commercial builds up to a powerful climax. Starting with a shot of Sagan from a billboard, we accompany him all the way to the finish line, where he is victorious. That is where Tinkoff Bank’s message ‘Tinkoff – The biggest online bank in the World. From Russia.’ is delivered. Shots from the Tour de France and CGI shots are mixed together smoothly with Sagan more up close and personal, into one fluent, vibrant sequence of shots, capturing the viewers’ attention.

For this shoot, multiple camera setups were used, a.o. an Arri Alexa, GoPros, a Russian Arm, etc. Shot in and around Monaco, no expenses were spared as multiple smoke machines covered an entire mountaintop, and a 200-meter rain setup was laid out. An abundant crew and numerous extras were also at the director’s disposal, to recreate the ultimate Tour de France-experience, resulting in a look and feel that is the excitement of a race combined with a corporate clean look.

According to Nikkels: “I stayed in Monaco for a week, due to extensive preparations (f.e. casting, locations and above all: safety) for us to be able to compress the whole Tour de France-experience into a one day shoot. It was inspiring working closely together with Oleg Tinkov, founder of Tinkoff Bank, and current world cycling champion Peter Sagan, who not only wore the yellow and green jersey in the Tour de France, but recently also became European cycling champion.”

Nikkels was also responsible for the successful campaign with Formula1-racer Max Verstappen for Exact and he directed the European Tour of Nike’s basketball icon Kevin Durant. Nikkels is becoming somewhat of a speed specialist, since he also successfully directed various commercials for automotive brands like Volvo, Opel and Nissan. Nikkels is now repped in Amsterdam, Budapest, Istanbul, Mumbai, Moscow and Kiev.