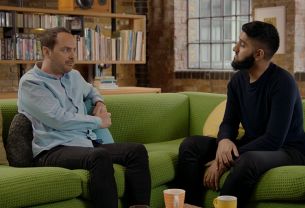 Launching on Thursday 31st August at 9.10pm the 30 second spot will air during the first episode of the new Educating… series set in Greater Manchester.

Fans of the show will remember two stand-out characters from the hugely popular Educating Yorkshire; pupil Musharaf 'Mushy' Asgha who won the hearts of the nation when, thanks to the help of teacher Mr (Matt) Burton, he learned methods to overcome his often crippling stutter and achieve the C grade he needed in his English GCSE.

The pair feature alongside three former students, each sharing their own inspirational stories. Mr Burton draws parallels between former Open University student Paul and Mushy, both having bravely overcome life’s hurdles to study for a degree. Viewers will be able to find more stories at www.all4.com/theOU.

The exclusive campaign produced by Sassy Films and brokered by 4Sales and Mediacom, is the latest on-air activity resulting from a six month ongoing partnership between Channel 4 and The Open University that launched earlier this year.

This Autumn the brands will host an event themed around social mobility, a shared focus area for all parties.

Musharaf 'Mushy' Asgha said: “I feel really proud to be part of this campaign for The Open University. I never really thought that university would be for me, but  I was lucky to have Mr. Burton to teach me and was able to go to uni after school. Organisations like The OU are an alternative route to higher education and  I hope that this campaign can inspire people to study for a degree.”

Danny Peace, Agency Principal , Channel 4 said: “This latest collaboration with The Open University featuring the nation’s much loved Mushy and Mr Burton is a great example of how we can leverage our programme brands and talent across a partnership to deliver a really important message. This campaign is close to Channel 4’s heart with one of our core ambitions being to champion diversity including social mobility.”

Ella Hall, Head of Acquisition and Brand, The Open University said: “Mr Burton and Mushy represents a poignant TV moment that showed the real-life struggle of someone who overcame their challenges with the help and inspiration of their teacher. Their story resonates with the OU’s message about overcoming challenges and barriers. Using the natural warmth and humour of their relationship, this campaign allows us to further lift the lid on OU study by revealing the support provided to our students.”

Andrew Gifford, Partnership Production Manager at MediaCom said: “Reuniting Mushy & Mr Burton to link to and build upon the personalised student stories that launched this partnership in June is another fantastic demonstration of how The Open University and Channel 4 have been working collaboratively together throughout this campaign. Mushy and Mr. Burton are able to tie in their experiences in a relevant, authentic and engaging way to create a fantastic example of the power that Education has to positively transform people’s lives.”