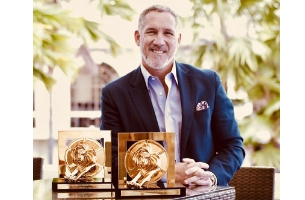 "Eduardo Maruri is a dynamic leader who brings out the best in colleagues and clients alike," said Michael Houston. "He has a passion and a track record for breakthrough creativity and building brands across platforms. We're confident he will usher in an exciting new chapter at Grey Europe."

Maruri and his father, Jimmy, founded their own agency in 1991 and Eduardo went on to serve as President and Chief Creative Officer of what is today Maruri Grey, the market-leading full-service agency in Ecuador.

Maruri Grey has been named Agency of the Year 12 times by the local industry trade association and one of the ten most creative agencies in Latin America.

Eduardo Maruri said, "It is a great honour for me to take on this new challenge. Grey has a tremendous reputation and potential for growth in Europe in the coming years."

Maruri succeeds Alain Groenendaal who will return to New York in a lead role, managing key corporate accounts, after his successful two-year tenure in Europe.