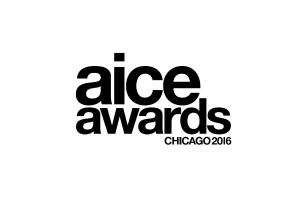 Finalists for the 2016 AICE Awards have been announced, and work from Editors Sam Ostrove of Cut + Run, last year’s Best in Show winner at the AICE Awards, and Editor Michael Reuter of EditBar has topped the list, earning four nominations each. On a company level, entries from Rock Paper Scissors’ editors and artists topped the company list for the second year in a row, combining for seven nominations in the Comedy, Digital Content, Docu-Style, Fashion/Beauty, Public Service and Best of Los Angeles categories.

The 2016 AICE Awards will take place on Thursday, May 12, at Navy Pier in Chicago.  A full list of Finalists can be found at the AICE Awards web site here.

Entries from editors and artists at Arcade Edit and Cut + Run earned six Finalist nominations each. For Arcade, the nominations were in the categories of Comedy, Digital Content, Music Video, National Campaign, Online Campaign and Spec Spot. At Cut + Run, nominations were earned in the Automotive, Broadcast Promotion, Digital Content: Over 90 seconds and Best of New York Categories. In addition, Cut + Run was represented with two finalists in the Montage Category.

Earning five nominations was work entered by the artists and editors of Optimus, which placed two finalists in the Regional Campaign category as well as nominations in Design, Under 50K and Best of Chicago.

Four companies earned four nominations each for their editors and artists’ work. These were Beast, nominated in categories for Dialogue / Monologue / Spoken Word, Best of Chicago, Best of Detroit and Best of San Francisco; EditBar, which swept the Best of Boston category with three nominations as well as earning a nomination in the Comedy category; The Mill, which was nominated in the Design and Visual Effects category and earned two nominations in the Color Grading category; and Work Editorial, which earned nominations in categories for Automotive, Montage, Music Video and Storytelling,

Finalists in the AICE Awards’ new Docu-Style category were Editor Ryan J. Hunt of School Editing for work for Brands of Santa and KBS+; Ted Guard of Rock Paper Scissors for work for YMCA and Droga5; and Sam Rice-Edwards of The Assembly Rooms for work for Mumsnet and Grey.

Cut + Run Editor Sam Ostrove, winner of the AICE Awards Best in Show in 2015 for his work on Volvo for Forsman & Bodenfors, tied for the most finalist nominations this year. He was nominated in the Best of New York and Montage categories for his “Made By You” piece for Converse and Anomaly, and was nominated, along with Cut + Run Editor Sean Stender, in the Montage and Digital Content – Over :90 for “Witness Greatness” for Kendrick Lamar and the 2015 Grammy Awards, out of TBWA\Chiat\Day.

Another four-time nominee was Editor Michael Reuter of EditBar in Boston, who took all three finalist nominations in the Best of Boston category for work for join.me via MMB, Subway via MMB and Jack Daniels via Arnold. In addition, his spot for join.me was also a finalist in the Comedy category.

Editor Logan Hefflefinger of Lucky Post received three nominations: two in the Best of Texas category for Ram Trucks and The Richards Group and for Timberland via YardNYC, while the Timberland spot was also nominated in Fashion/Beauty.

Also receiving three nominations was Editor Nathan Petty of Little Moving Pictures in San Francisco, who was nominated in the Best of San Francisco category for work for 19 Crimes from Kayser & Co and Amazfit out of Diko Creative. He was also nominated in the Sound Design category, along with mixer Joaby Deal of One Union Recording, for a video for the Advocacy for the Deaf.

Editors or artists earning two nominations included Tim Cahill of Optimus in the Under 50K and Best of Chicago categories; Graham Chisholm of Married to Giants in Toronto in the Best of Toronto category for work for Land Rover via Oryx and Sport Chek via Sid Lee; Joaby Deal in Sound Design for Advocacy for the Deaf, shared with Nathan Petty, and in Audio Mix for NVIDIA and AKQA; Ted Guard of Rock Paper Scissors in the Docu-Style category for YMCA and Droga 5 and in Fashion/Beauty for Gap Kids; Ryan J. Hunt of School Editing in the Docu-Style and Best of Toronto categories for Brands of Santa for KBS+; and Sam Rice-Edwards of The Assembly Rooms in the Docu-Style and Digital Content – Over :90 for work for Mumsnet and Grey.