Awards and Events 394 Add to collection

His companies, Vito DeSario Editing and Version 2, had a major impact on the post production industry in New York. 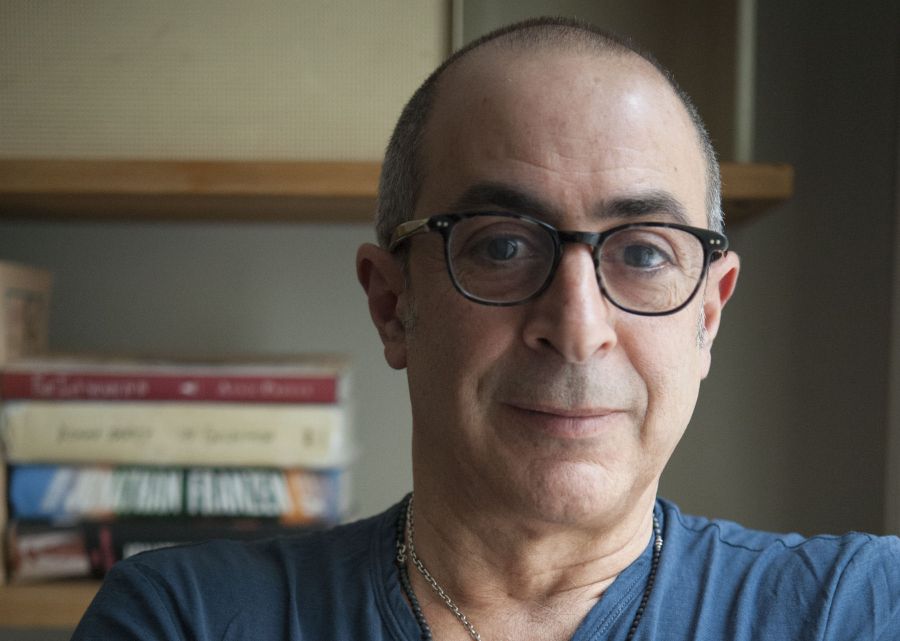 A perfectionist. A rock star. An innovator. Someone who was “electric with ideas.” These were all used to describe Editor Vito DeSario, who will be inducted into the AICE Hall of Fame at the upcoming AICE Awards in New York on May 11. From his start working as a runner at a company that edited feature film trailers to his launch of a full-service post boutique known as V2, DeSario has a long tradition of handling high profile projects, building strong relationships with clients and colleagues and taking some of the industry’s top talents under his wing.

“Vito is one of the living legends of editorial and post production business in New York,” says AICE Executive Director Rachelle Madden. “He’s moved the craft of editing forward and had an amazing impact on the careers of so many, from editors and assistants who worked with him to the agency producers and creatives whose work he brought to life. We’re extremely gratified to recognise his contributions by welcoming him into the Hall of Fame.”

A self-described “lost kid from Long Island,” DeSario drifted through a maze of odd jobs before finding his way into post production. Commuting into Manhattan on the Long Island Railroad, he befriended a man who was partners in an early independent editing shop called Cinemetric. There, working with editors Morris Albender and Larry Plastrik, he was first exposed to the magic of film editing, albeit surrounded by the glamour of Hollywood, not Madison Avenue.

“On my first day, I went into a screening room to watch a movie that Morris and Larry were going to cut the trailer for,” he recalls. “The movie was ‘Alien,’ and Richard Greenberg of R/Greenberg was there, along with Paula Silver and Steve Frankfurt. When it was over I asked Morris, ‘What do we do now?’ He said, “Now we take it apart.’”

DeSario went on to cut trailers himself, working on “Sophie’s Choice,” “Ghostbusters,” “Back to the Future,” “Out of Africa” and many other films. At the time, he says wasn’t all that interested in commercials, a handful of which were cut at Cinemetric. That changed when he met a producer at Lowe & Partners who recommended him for a job cutting a Sprite spot. “That’s when my career in advertising took off,” he says.

On the recommendation of that spots’ director, Graham Henman, he started getting more and more commercial work, to the point where he decided to go out on his own, launching Vito DeSario Editing in 1988. Initially he rented space from his former Cine Metrics bosses, with another newly-launched editorial shop, Lost Planet and its founder, Hank Corwin, right down the hallway. “I didn’t know a lot about the business then,” DeSario admits. “I was the dumbest fuck on the planet. All I wanted to do was good work.”

That he would, cutting memorable ads for such brands as Mercedes-Benz, Verizon, Kodak, UPS, Intel, American Express, Lancôme, Lincoln and many, many more. His style of work always fits the needs of the product category or the tone of the script – jagged when cutting hard-hitting anti-drug PSAs, evocative and cool when cutting sexy fashion and beauty spots, story-focused and cinematic when working for global corporations or luxury automotive nameplates.

In 1999, he transformed and updated his brand, changing Vito DeSario Editing into Version 2. The company added capabilities in visual effects and music and sound, launching a sound division called Straightjacket and an effects and design division called Liquid Light; both were moves that were ahead of their time. As DeSario recalls, “I always embraced change by redefining what an editing company can and should be.”

In many respects, that new generation was already working for him. Tina Mintus, Editor and Founder of KYLE nyc and a V2 alumnae, recalls how she and DeSario shared a similar path to the industry. A precocious teen who spent her days playing chess in Washington Square, an industry friend she met on the subway steered her to Vito DeSario Editing, where she and DeSario clicked. Within a few years she’d become his assistant.

When asked what made DeSario unique as an editor, Mintus replies quickly. “It was his creativity,” she says. “He’d look at every project as an original problem, and come at them from angles I never would have thought of, always unexpected. And he was very innovative, very tactile – he had a real hands-on approach to editing and always took things farther. He was full of ideas.”

His impact on her career, she notes, is monumental: “I would not be anywhere without him,” she states flatly. “We were both high-school dropouts, and when I told him I was going to be an editor, and I was going to be one soon, he challenged me, so I made it happen. I watched him go through every step of the editing process on over a hundred spots, and working with him was the purest form of mentorship I could have ever hoped for. He is why I am successful, one hundred percent.”

“Vito truly was a natural mentor,” concurs Micah Scarpelli, owner and editor at Uppercut in New York who also worked as DeSario’s assistant at V2. “I learned more from him than I did working with anyone else. And a lot of the people who worked at V2 have gone on to open their own places. He’s got this great legacy of producing top people in our industry. And he was always willing to help you make your work better.”

Wendell Hanes, Founder and Composer of Volition Sound, was initially hired by DeSario to work as an assistant editor, and together they launched Straightjacket, the music and sound division. An honors graduate of Brown University who’s also a musician, Hanes had been an assistant editor at Spike Lee’s 40 Acres and a Mule when a director referred him to DeSario.

Hanes went on to spend a number of years with DeSario, during which he transitioned full time into music and sound before leaving the company – at DeSario’s rather abrupt insistence, he adds – to join BANG music. Now as head of his own music company, he realizes the lessons he learned from DeSario have been invaluable in achieving the success he’s found today.

“Vito is a leader by example, and a mentor by example,” Hanes offers. “His very presence brings out your best. For me, working for Vito was like playing for the Dallas Cowboys, where the expectations were very high. His productivity was infectious. But I loved being on the winning team, and I took the ball and ran with it.” They remain friends, and DeSario's name is never far from his mind: “I use it as the password to unlock the screensaver on my computer,” he confides. “I write out Vito's name five to ten times a day. As soon as I type it, I can hear the ‘Rocky’ theme music cueing up to make something great.”

Clients and collaborates similarly recall experiences with DeSario that had a huge influence on their careers. “He saved my butt many, many a time,” says Andy Hirsch, Chief Creative Officer Executive and Chairman at Merkley & Partners. Hirsch first started working with DeSario on Sprite ads at Lowe & Partners. “Vito was the go-to editor on that account, along with Diet Coke, Mercedes-Benz and Citi Group,” he recalls. “The style of editing was changing, with an emphasis on quick cuts, and Vito understood that. I liked him from the beginning. He was very chill, very soft-spoken, with these watery brown eyes, long hair and signature black mock turtlenecks. The women loved him; heck, so did I. Of course, as the cuts got harder, his voice would get higher.”

One of the characteristics Hirsh most respects in DeSario was his consistency. “I watched him go from one little room in a loft space to his own place with his name on the door,” he says. “And he never changed. He was always this warm guy who’d greet you with a big hug. He never forgot where he came from, or the important things in life. He was talented and opinionated, sure, but also a poetic guy who didn’t let the business take that away from him. He was a true craftsman in the art of editing, with great respect for details and pride in his work through and through. I’m excited that he’s getting this recognition from AICE.”

Producer Bob Shriber worked with DeSario extensively on campaigns for a wide range of agencies. They worked together for brands like Verizon, UPS, RCA and the Red Cross, on spots shot by directors such as Tony Kaye, Barry Sonnenfeld, Michael Apted, Marcus Nispel and a young Jake Scott, whose very first ad campaign was edited by DeSario. “Vito always brought his point of view to the process, and we welcomed and expected it,” says Shriber. “He improved the work and often gave it a whole new look, which was incredibly important. He’s a fantastic editor, and I’m honored to call him my friend.”

George Billard first met DeSario in the mid-1990s on a Kodak job for the Academy Awards, created by JWT and produced through Billard’s company. As with Shriber, the two became friends and worked together on more ads since then. “Collaborating with Vito is always a pleasure,” he says. “He cares so intensely about the work. No matter how many hours we toiled away on something, inevitably he’ll call me a day later and say he went back in and shaved a few frames off this or that, or moved a shot, and that it’s better. And as it turns out, he was always right. He’s a perfectionist.”

Since closing Version 2, DeSario has largely stepped away from editing commercials (except, he says, for old friends), but he’s still busy cutting. He’s been editing music videos and indie features, including the 2013 comedy “A Birder’s Guide to Everything,” and consulted on the 2014 romantic comedy “Big Stone Gap.” Most recently, he and Billard collaborated on a documentary, DeSario’s first, set to air later this spring on PBS. Titled “They Shall Not Perish: The Story of Near East Relief,” the film tells the century-old story of a massive American aid effort designed to help over a hundred thousand children orphaned by ethnic and sectarian strife in the waning days of the Ottoman Empire.