The Sustainability Channel 251 Add to collection

The Assembly Rooms teams with director Anthony Dickenson, All Mighty Pictures and Time Based Arts on heartbreaking film 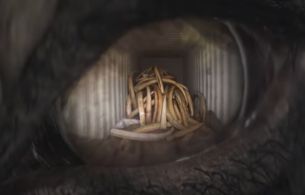 This compelling new film for WWF UK's Christmas campaign takes a hard-hitting look at the devastating impact of the illegal ivory trade. Edited by The Assembly Rooms' Ruth Hegarty, 'Elephant Eye' was directed by Anthony Dickenson and produced by Mark Harbour at All Mighty Pictures.

"The whole process was really interesting because I started cutting the film with basic plates of the eye. So we had to use our imagination in the early stages of the edit," commented Ruth. "We were relying on the Max Richter track and the narrative footage inside the eye to tell the emotional story of the film. Then when Time Based Arts started sending through the animation it felt like the story had another emotional layer. This was the key layer of storytelling. It was really exciting to see the animation of the elephant developing during the process. It was a pleasure to work on a such an important campaign with WWF. This issue is more relevant than ever."

Over 50 elephants a day are killed as a result of it's prevalence. Signing up to WWF will help to protect wildlife at risk.