Josiah has previously worked with the likes of Beyoncé and J. Lo 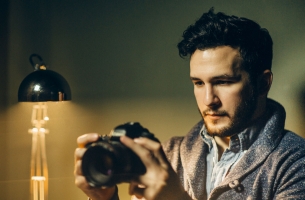 He’s captured the beat of Beyoncé’s “Drunk in Love” and J. Lo’s “Booty” with Iggy Azalea while helping explain ‘Melo’s love affair with IWC timepieces. Now Editor Josiah Spencer is bringing all of his storytelling skills to Wildchild in New York, where he’s joined the editorial roster.

Spencer is a multi-faceted artist and musician whose work encompasses not just creative editorial but also directing, photography, effects and design. At Wildchild he’ll partner with top agencies and brands for assignments in such high-gloss categories as fashion, beauty, apparel and luxury. To screen his reel, click here.

“We’re thrilled to have an exciting talent like Josiah joining us,” says Wildchild Founder and Editor Yvette Piñeyro. “We’ve worked with him in the past and have always admired his skills as a storyteller and visual stylist, not to mention his dedication to producing work of the highest creative caliber. He’s a great addition to our company.”

A native Texan who graduated from UT in Austin, Spencer grew up in the film and ad business; his father runs one of the biggest production companies in Austin and his sister is an agency producer there. Spencer teamed with them on the feature film he co-directed and edited, “Return to the Hiding Place,” working from a script his father wrote. The film, which stars another sister, the actress Rachel Spencer Hewitt, is an historical drama set against the backdrop of World War II. It’s screened at numerous festivals around the country, winning Best Feature and Best Directing honors at the Bel-Air Film Festival.

He began his career in Los Angeles, working as an assistant to several feature film editors, which helped inform his approach to narrative and long-form editorial work, he notes.  Since moving to New York several years ago he’s edited for a number of top editorial houses, initially assisting before stepping up to editing himself.

“I’ve been fortunate to collaborate with some great filmmakers, photographers and editors, and that’s given me great exposure to a wide range of style and techniques,” Spencer says. He’s drawn to the fashion and beauty space, and notes the connection between this highly-demanding category and his music video credits.  He’s edited ad content for brands such as Coach and St. John, as well as for Taylor Swift’s fragrance line, while his music videos for artists such as Beyoncé and J. Lo are the result of his collaboration with the director Hype Williams. He also partnered with director Francesco Carrozzini, a European fashion photographer and filmmaker, on the “New York City” video for Lenny Kravitz.

Earlier in his career Spencer worked on a number of Wildchild projects, so when Piñeyro reached out about joining the roster he was eager to sign on. “I’ve had the chance to work closely with some really great people here, and the environment is inspiring,” he comments. “I love the style and genres they specialize in and their creative approach. The place has the vibe of an artists’ collective – there’s lots of sharing and collaboration. It feels like the future of our industry, where art and advertising are continually merging and overlapping.

“Being among a group where so many people do multiple things, and do them on a professional level, is really cool,” Spencer continues. “It allows for many opportunities to explore. I’m looking forward to being a part of it.”