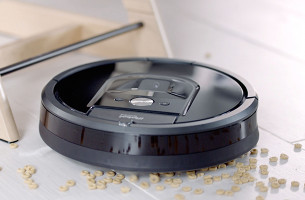 Ed Han Consulting and CinemaStreet Pictures have teamed again for a new commercial for iRobot’s Roomba vacuum cleaning robot. The spot introduces the new Roomba 980 from iRobot, the leading provider of robotic technology-based solutions for the home. The TV spot was directed by Han and executive produced by CinemaStreet’s Dana Offenbach. A former ad agency creative director, Han also functioned as Creative Director and provided both creative and strategic direction for the ad.

The production of the new commercial rolled out over a multi-day shoot on several locations in New Jersey. In addition to inserts and close-up product photography, the script called for Han to work with kids and animals. This is the second collaboration between iRobot, Ed Han Consulting and CinemaStreet. Adweek reported that the first spot the three organizations produced together was named one of the five most effective ads of Q2 in 2015 by Ace Metrix (read the full story here: http://goo.gl/88SZjX).

Prior to launching Ed Han Consulting, Han was ECD at the boutique agency Walton Isaacson, where he oversaw the creative output of its offices in New York, Chicago and Los Angeles. Before that he spent a decade at Publicis in Chicago and New York, rising to the position of Sr. VP/Creative Director.

Han says that his directorial work benefits from his experience as a creative director. “Directing is a natural extension of what I’ve done for clients on the agency side,” he offers. “I’ve always believed the story starts with strategy. And as a brand consultant and director, I can help brands connect the dots in ways I wasn’t able to before.”

Offenbach, who first worked with Han at Walton Isaacson, brings an extensive agency background to the equation as a broadcast business manager and producer at Y&R and UniWorld before launching CinemaStreet. Her experience in both advertising and entertainment – she’s served as producer and executive producer on a number of independent feature films – allows her to bring not just creative smarts to each project, but production efficiencies as well. “Our goal is always the same,” Offenbach says of her segueing easily between ads and movies. “It’s to deliver high-quality content that connects with viewers.”

“This project is a great example of the benefits Ed’s relationship with CinemaStreet offers both marketers and agencies,” Offenbach continues. “Ed’s many years of working directly with clients gives him a deep understanding of the marketing process. And our partnership provides him with total production and post flexibility, which lets us work quickly and efficiently. It’s not the conventional way of approaching creative or production, but we’ve turned it into a very successful process for global brands, small start-ups and non-profits. We’re excited about the opportunities ahead with this approach.”