Eclectic's Battle of the Bands

Eclectics Battle of the Bands, in conjunction with Little Black Book, kicked off in Great Portland Street last night, and it started with a bang. The Mill, Weapon 7 and RSA were all represented. 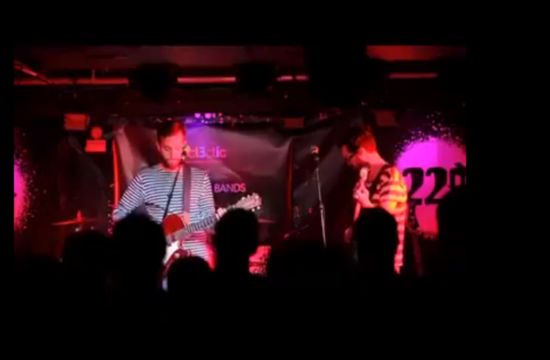 Eclectic’s Battle of the Bands, in conjunction with Little Black Book, kicked off in Great Portland Street last night, and it started with a bang. The Mill, Weapon 7 and RSA were all represented.

Read more below or click below link to vote for your favourite act
http://www.youtube.com/user/eclecticsoundsltd?feature=mhee

Colonel Weng Wah was on form for RSA, while Dead Pirates were The Mill’s men and Provenance of Squid performed on behalf of Weapon 7.

229 The Venue, on Great Portland Street, was the aptly named venue for the evening’s events, with the crowd rapidly filling the underground, graffiti-clad room ready for a night of tunes and maybe a tipple or two. And tunes is what they got, with three acts that couldn’t have been much more diverse; hip-hop, punk and indie all in the mix.

Dead Pirates were up first, charged with the task of working the crowd from spectators to moshers, which they did justly. Occasionally sipping from his bottle of Budvar, bearded front man Matthieu ripped up the room, blending picky guitar work with much heavier rifts, switching effortlessly between the two with the slightest flick of his fingers.

Complimented by the band’s keyboard, they proved their talent to the room with a full set of songs that wouldn’t sound out of place if performed on a much larger scale. Their indie-rock sound could be likened to early work from Kings of Leon, with the electronic sound of the keyboard giving a spin on things.

To keep up proceedings, Provenance of Squid, which is probably the most fantastic band name of all time, took over. And live up to their name they did. The five-piece took to the stage with the drummer, Jeremy, complete with red body paint to match the blood that he was to spill on his cymbals by the end of their set.

Provenance of Squid definitely aren’t your generic, run of the mill, covers band which they proved perfectly last night. With their hard and fast punk take on songs from all ends of the musical spectrum they naturally generated a huge buzz in 229. That was exactly their aim as Jeremy said: “we just want to make people jump”.

Kicking off with punk classics such as The Clash’s “I Fought the Law” and “Ever Fallen In Love?” by Buzzcocks, they then broke into a clever and surprising medley of the Metallica classic “Enter Sandman” and the late Michael Jackson’s “Beat It”. Continuing with a set that never lacked energy, one tune that stuck out for me was their version of Wuthering Heights. From the intro, it shouldn’t have worked, but they somehow smashed it, turning Kate Bush from an 80’s pop goddess into punk princess.

It would only be fitting for a military man to end the day’s battle but with none available, the suitably named Colonel Weng Wah ended it in style. Donning a tee shirt marked with ‘Hip Hop Is Dead’, it seems that front man Ben and synth player Hans Freekit, are on a mission of reincarnation.

Coming on stage with an almost ninja-like stealth, Weng Wah went on to play a typically energetic set. And they are men with a message, proved by a number of one-liners, including “You don’t like us, we don’t care!”, “There’s no school, like the old school” and “We used to have a family, we still do, they just don’t have me!” After the show, Ben said he loved the other two acts of the night, adding: “music is an art form, I love all music. There was a lot of energy tonight.”

It was the end of a great night, with three radically different musical acts all equally appreciated by the heaving crowd and all hoping to move on to the next round and winning the opportunity to play in Cannes. Get down to 229 The Venue on Wednesday 18th May for part two of the first round, where there will be another four original, fantastic acts to see representing DDB, AMVBBDO, Saatchi and Saatchi, and Primefocus. Guaranteed to be another cracker.