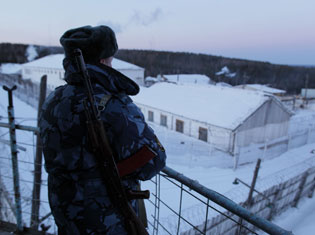 Nick Read’s The Condemned, featuring a score from Eclectic Music, has been nominated for a Grierson Award.

First shown on BBC Four in October 2014, the film is nominated in the ‘Shell Best Documentary on a Contemporary Theme – International’ category.

The feature-length film documents the end of the line for some of Russia’s most dangerous criminals by taking a look inside Penal Colony 56; Russia’s most impenetrable and remote maximum security prison, the home of 260 men who are responsible for the murders of almost 800 victims.

More recently, Eclectic collaborated with Read, the acclaimed Director of Slum Dog Children of Mumbai and Return to Tiananmen Square, on another of his documentaries; Bolshoi Babylon.

The film, which again features a score from Eclectic’s Smith & Elms, follows the dancers and managers of the Bolshoi Ballet throughout the 2013/14 season, as they tried to recover from the brutal attack on their artistic director, Sergei Filin.

The Grierson nomination is another highlight for Eclectic, who’ve fared well so far this awards season having already picked up Bronze at The Clios for Best Use of Music in Johnnie Walker’s ‘The Gentleman’s Wager’, a Best Original Song nomination at the LIAs and a selection in the ‘APA Top 50 of 2015’ for their original composition for Kenco’s epic ‘Coffee vs Gangs’ spot.