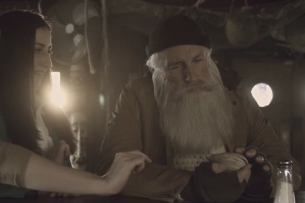 The star of the new effort is Olde Salty, a well-cured spokesperson, who will drive home the benefits of salt with offbeat humor.  The cross-platform campaign includes an extensive series of online videos and content across digital and social channels, including YouTube, Facebook, Twitter and Instagram.

Curt Detweiler, Grey San Francisco's Chief Creative Officer, said, "At home on the water, in the eye of a blizzard, or bellied up to the bar with his pet clam, Brine, Olde Salty is equal parts sage and elder statesman."

The theme of new campaign is "Everything's Better with a Little Salt."  His ongoing adventures include sliding across icy roads, sharing virgin tequila shots and holding court, all in the service of one of America's favorite minerals.

"Our goal was to create an iconic personality that could spread the word on many important uses of salt from traffic safety to softening water to the better performance of household appliances," said Milan Martin, President of Grey San Francisco.  "He follows in a long line of Grey's advertising icons that include the ETrade Baby and Rob Lowe for DirecTV."

"Grey has been an amazing partner for us, bringing us very creative ideas to help us demonstrate that salt is one nutrient essential to life itself," says Lori Roman, President of the Salt Institute.  "Now Olde Salty enables us to have a conversation with a whole new generation of people about the value of salt in everyday life."

Grey and Salt Institute executives believe the time is right to extend the conversation about the benefits of salt in all walks of life.   The National Weather Service reported that 51% of the contiguous United States remains covered by snow.  A study conducted by Marquette University found that, when winter storms turn roads to ice, de-icing them with salt reduces accidents by 88% and injuries by 85%.  Importantly, a New England Journal of Medicine study found that low salt-intake was linked to increased odds of a major heart event or death.  And last week, a new study from Vanderbilt University says salt may help guard against infection.