Trends and Insight 341 2 Add to collection

MassiveMusic's Job Poels and Philip Oomen discuss working on ‘Dysconnected,’ a short film which explores the impact of social media and AI on our lives 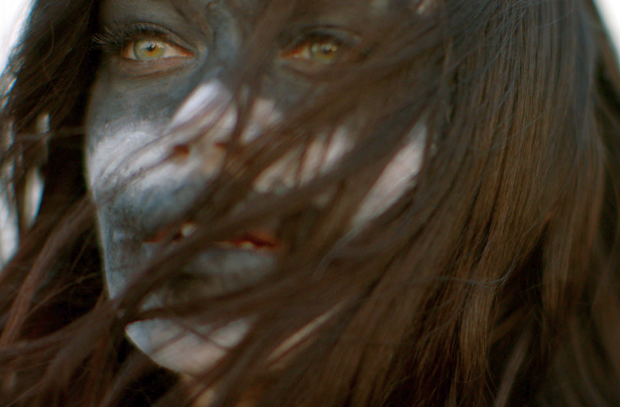 Do we really show our true selves on social media? This is one of the many questions that will probably pop up in your head after you watch ‘Dysconnected,’ the 10-minute short film which premiered at L.A. Shorts International Film Festival on 21st July.

The latest work by director Tom Schlagkamp covers one of the hottest topics in today’s modern society: the impact of social media and AI on our lives. It does that by telling the story of Roxy, a millennial who is struggling to find her place in life, carried away by likes and instant gratification.

MassiveMusic, the international creative music agency behind the music production, composition and supervision for ‘Dysconnected,’ was challenged to reflect the rollercoaster of emotions the main character goes through whilst keeping a consistent and recognisable music theme throughout the whole film. It turned out to be a collaborative effort and a highly creative one, with director Tom Schlagkamp showing once again, after his ‘Rock ‘N Roll Manifesto’ campaign from a few years ago, how life is all about perception.

MassiveMusic sat down with Job Poels and Philip Oomen, music producer and music researcher respectively at the company, to find out how music played a big role in portraying and elevating the intention of the movie. 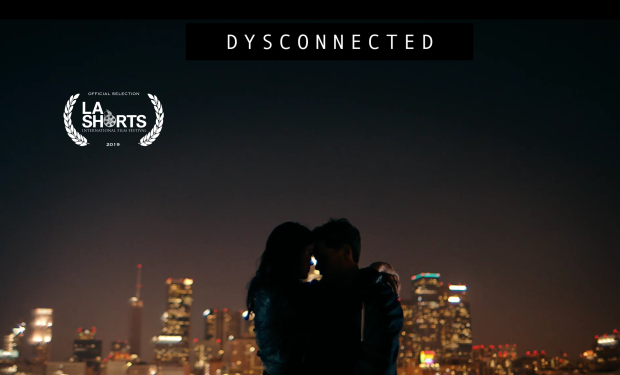 Q> What were the challenges composition wise?

Job Poels> There were quite a few ones, but that’s what makes the film special. There is a scene where the two main characters decide to break the car they’re driving. The music progresses with it as the whole situation gets worse and worse. That’s quite a rebellious scene but we had to be smart and don’t give 100% as, after that one, there’s a scene in the club which is even wilder. The whole movie challenged us to forward-think and ponder our music choices. It was meant to be a crescendo. I still remember the first a-bit-too-cautious versions so, along the way, we made it more and more extreme. Take the club scene, for example. It was not supposed to be a cool dance track. That was not the goal. The role of the music was to support the fast-paced narrative of the whole movie.

Q> How did you guys communicate with director Tom Schlagkamp for all things music?

Job> It was a track-by-track process because we quite easily decided on where the music needed to be placed. We needed an intro that would translate the atmosphere Tom was looking for. That’s also what made it interesting: we had to keep in mind the bigger picture, with a consistent and recognisable theme despite the changes and emotions the main character goes through.

Q> Composing and producing music for short movies vs commercials: what is the main difference?

Job> I think you have a lot more breathing space to tell the story. If you think of ads, you need to set the tone, build up and end it in the span of 30, maybe 60 seconds. I didn’t have that with ‘Dysconnected’ because there were more possibilities to tell the story from a music perspective: you transition from this weird trippy dance track to fairytale-gone-bad to end up with an emotional, acoustic track. 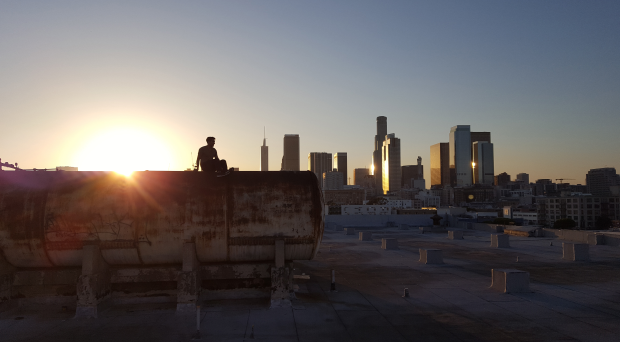 Q> The ending scene sees ‘creative search and licensing’ as a service. How did you guys find ‘Carry You’ by Novo Amor and why was it the perfect song to end the movie?

Philip Oomen> We started a collaborative playlist with the director to inspire each other with the search. The song needed to convey that storm-is-over message. We wanted to find something peaceful, uplifting but delicate at the same time. It is addressing the question ‘Who are we really?’ Ali John Meredith-Lacey, the singer who - by the way - was once signed by MassiveMusic, really liked the film and Tom was also a fan. Plus, the lyrics of ‘Carry You’ were just perfect. Everyone was happy but it took a while until we found the perfect song. I also love it because we made sure to sync the very last moment of the film, right before the screen turns black, with the highest energy peak in the song. It highlights the importance of the moment even more.

Q> It’s as if the mask that we wear in public (or on social media in this case) finally goes off.

Philip> Exactly. It was important to portray the feelings that the main character goes through. ‘Carry You’ is the moment of relief. It is a really honest and authentic track and it does the trick because of the uptempo craziness that you listen to throughout the whole film. The ‘silence’ is more effective if there’s chaos before. 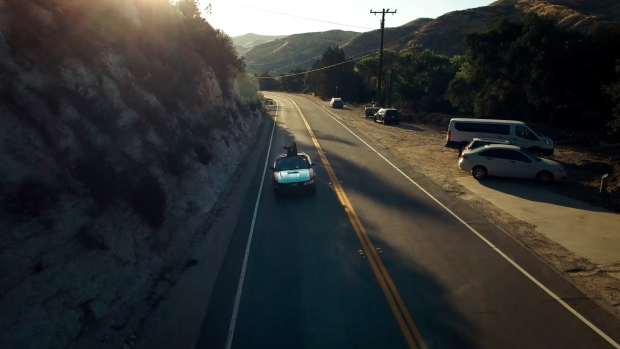 Q> So, what was your favourite part of the movie for which you produced the music for?

Job> The club scene. I chopped up the classical piece and detuned it. And the fact it was combined with visual glitches made it even more perfect. It sounds so surreal because she is living in this made-up world which is slowly falling apart.

Q> How long does it actually take to create such a track?

Job> It depends. Sometimes it can take an hour, sometimes it can take a day. Then you have to keep into account all the feedback rounds and adjust it if needed. What I particularly liked about this project is that Tom, the director, already had a clear musical direction and a very collaborative approach. He’s very music-minded.

Q> To what extent can you relate to the story of the movie? 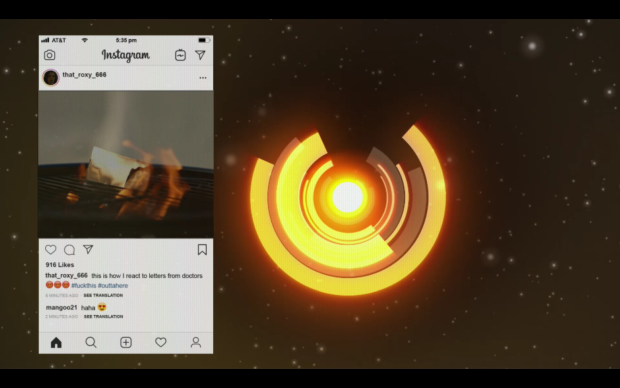 Q> In the movie, Roxy has an AI therapist. What is your take on AI?

Job> I think it is only as good as the data it gets. That has been known for quite a long time. For instance, they have been experimenting with judging criminals with AI but the data of the past four years isn’t accurate enough for an accurate verdict. That is the irony of the movie: she’s not portraying herself on social media, she’s portraying someone else so the AI looks at that data and gives the right advice to this ‘fake persona’ but the wrong advice to the real Roxy. That is where it goes wrong. I think that is the best message that director Tom Schlagkamp conveyed. Funnily enough, I think that technology is also trying to become less intrusive, at least to some extent. Think of apps that notify you when it’s time to go to sleep or send you stats about how much time you spend on your phone on a specific week. Music could potentially help by carefully integrating sound. Brands could start thinking if, within their corporate responsibility etiquette, they’re open to including sonic corporate responsibility too. What we listen to has a huge influence on our well-being.

Q> How exactly do you think sound could help?

Job> You might think I shouldn’t say this because I work at a music agency but you also need silence sometimes. You might need to turn off your ringtone because people don’t want to be bothered, for instance. What I want to say with that is that we should be more conscious about how we treat and integrate sound. Take UI sounds for example: you shouldn’t slam them all over the place. If you have a sound that is responding, supporting and guiding your customers then perfect, but if you have too much noise and background sounds that would create a stressful experience. 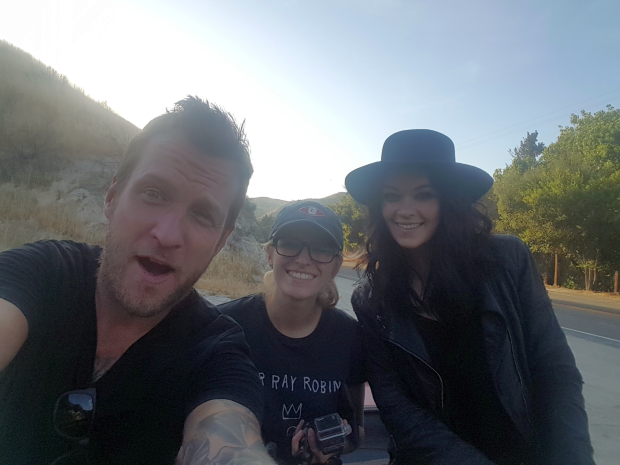 Job> This question should deserve a whole book as an answer. It’s almost impossible to foresee what is going to happen or really understand how it will evolve. At this very moment, AI is good at generating melodies but not good enough to do everything by itself. It would make sense if it ends up being a composer’s tool, but I’m still sceptical. I was reading about a few AI-composed songs. They promote them as ‘created by AI’ and then you see a list of 20 people in the credits. If you say ‘powered by AI’ it’s one thing. Also, talented composers can be really quick. People tend to underestimate it.

And what about AI and live performances?

Job> Weird. Imagine a punk band playing AI songs on stage. They won’t even be smashing guitars anymore. It would sound a bit... soulless, I guess.

Q> Will MassiveMusic create music for other short movies?

Job> We're happy to explore the possibilities. Especially for cool, creative, inspiring projects that manage to get us excited.

‘Dysconnected’ got shortlisted at L.A. Shorts International Film Festival with the premiere taking place at Laemmle NOHO on 21st July. Now in its 23rd year, L.A. Shorts is the first and longest-running short film festival in Los Angeles.