“De Tuinslang” (the garden hose) is the latest project in Donnie’s collaboration with RAYNSIE and Amp.Amsterdam 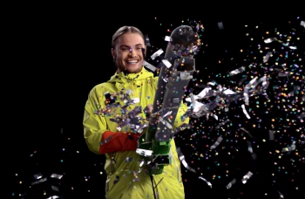 “De Tuinslang” (the garden hose) is the latest project in Donnie’s collaboration with RAYNSIE and Amp.Amsterdam. It’s an electro-infused hip-hop track with wonderfully unsubtle musings about a garden hose. And all that dirty talk has inspired a hyper stylised video that leans on the same garden metaphors as the song itself.

72andSunny Amsterdam, the creative company who created and developed RAYNSIE teamed up with Amp.Amsterdam to find the perfect embodiment of the brand’s colourful and bold attitude. RAYNSIE and Donnie; a wonderfully weird mix of an up-and-coming Dutch hip-hop artist with a tongue in cheek style, and quintessentially Dutch rain gear that prays for sucky weather. The collaboration between both Donnie and RAYNSIE started last year when he performed at RAYNSIE’s launch parties in London and Amsterdam.

RAYNSIE is a colourful, performance-driven coverall made for urban cyclists and skaters that allows you to go out whatever the weather. Available in six colours, the debut collection pays homage to Amsterdam with bright colours and prints inspired by Dutch food mythology: ‘Dips’ – for the Dutch love of dipping almost any food and ‘Hagelslag’ - the traditional sweet sprinkles the Dutch stick on bread. With a price point ranging from €299 to €350, RAYNSIE is available exclusively online via RAYNSIE.com.

Hair and Make Up: Minke Boeyen