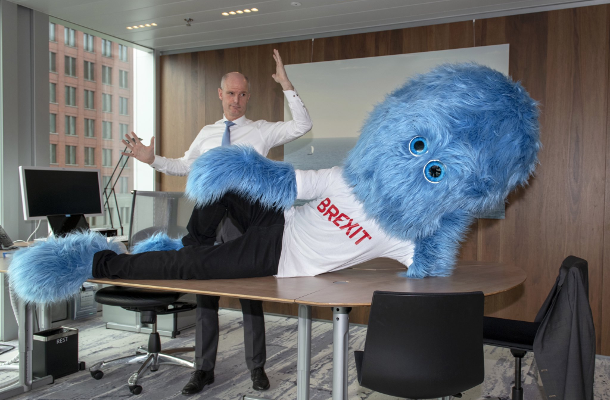 The Dutch Ministry of Foreign Affairs has unveiled a mascot for its Brexit-readiness online services - a giant blue woolly monster that’s been dubbed the ‘Brexitmuppet’.
The playful campaign by Amsterdam agency The Odd Shop advises companies to use the government's online Brexit impact scan, or check the official website, for more information on whether the UK leaving the EU will have consequences for them.
The muppet was unveiled in a tweet from foreign minister Stef Blok in which he posed with the blue beast and asked: “Have you already checked the consequences Brexit has for you or your company? Do the Brexit Impact Scan http://brexitloket.nl or check http://rijksoverheid.nl/onderwerpen/brexit …. Make sure Brexit doesn't in the way.... or lies.” 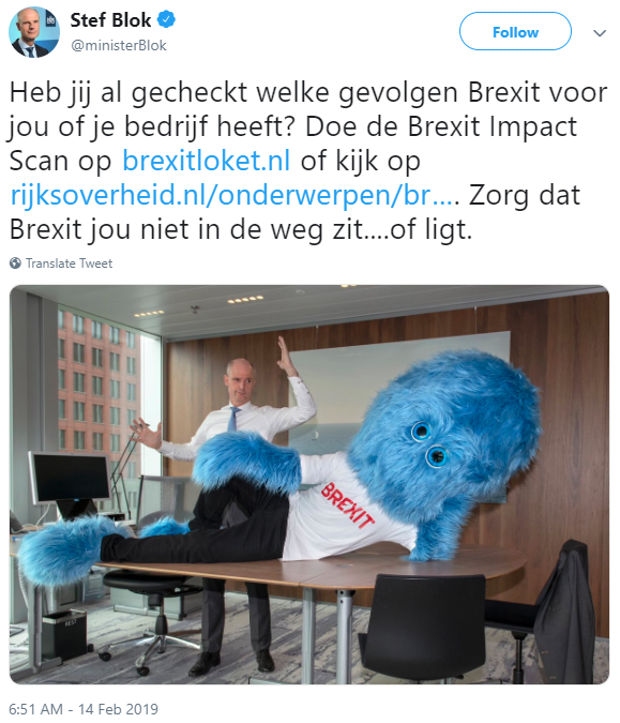 According to The Odd Shop, the campaign aims to educate the large proportion of business owners in the Netherlands who are not working to prepare for Brexit. They referred to research that shows that three-quarters of entrepreneurs are not yet well prepared for the departure of the UK from the EU, and that many underestimate the consequences, thinking their businesses impervious to the changes.
The Brexit portal warns that entrepreneurs might face their products remaining with customs longer, with British certificates and licenses that may no longer be valid and possibly with a new digital limit for data traffic.
The Odd Shop’s research concluded that there is a strong 'optimism bias' among entrepreneurs.
In order to prevent Brexit from getting in the way of their business, Dutch entrepreneurs can also take a ‘Brexit Impact Scan’ at http://brexitloket.nl. Using this online tool they can check whether Brexit is going to affect their business and what they need to do to prepare for it.
view more - Creative