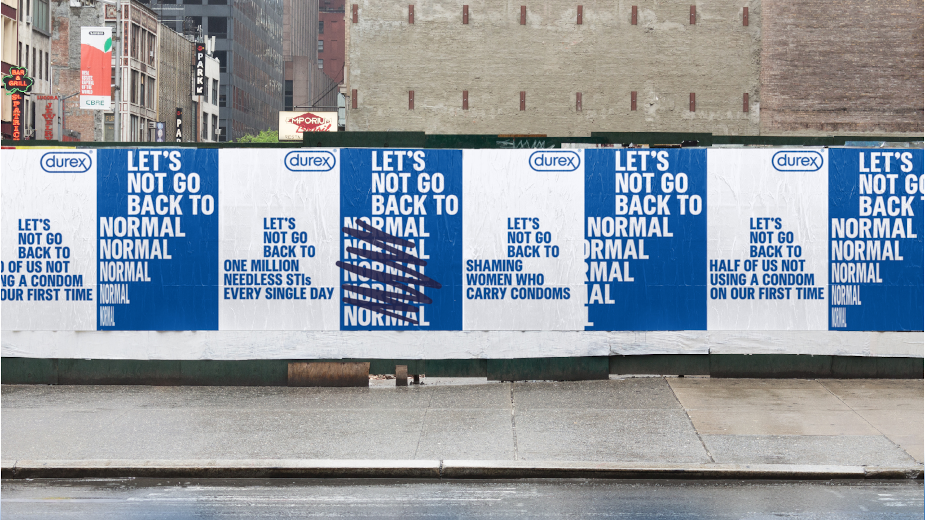 As countries around the world outline plans to ease lockdown restrictions and people begin to look toward some semblance of normality, Durex has encouraged people not to go back to normal – because normal wasn’t good enough.
Pointing to ‘norms’ such as shaming women who carry condoms, men not wearing them because they don’t like the ‘feel’ and one million preventable STIs every single day, the world’s leading sexual wellbeing brand argues that the current crisis represents a unique chance to reset what is ‘normal’ – and that nobody should want to return to a normal where we weren’t protecting ourselves and each other anyway.
This latest execution of Durex’s new positioning, ‘Challenge the Norms’, was devised by the RB brand’s global creative agency Havas London and centres around an empowering manifesto, delivered across owned channels and social, plus further executions over the coming weeks. It reads:
Let's not go back to normal.
For too long, normal just wasn't good enough.
Normal was making rubbish excuses for not wearing a condom.
Normal was shaming women for even carrying one.
Normal was one million needless STIs every. single. day.
So, this is a call to arms, legs, bums and private parts.
Let's not go back to normal.
The world has never been
so ready for change.
So, let's all change it for the better.
For each other.
Sure, it's been pretty weird lately.
But, weirdly, that's what makes 2020 so important.
So when it's time to get back out on the streets.
And jump back in the sheets.
Let's not go back to normal.
Let's have good sex.
Safe sex.
For everyone, forever.
Ben Wilson, global category director, Sexual Wellbeing, RB, says: “Everyone is talking about going back to normal. But nobody is questioning whether we should. Truth is, ‘normal’ is rooted in a lot of outdated conventions and when it comes to sex, we can do better. The current crisis is a unique chance to reset what ‘normal’ looks like, and we’re taking it upon ourselves to challenge that normal, because nobody should want to go back to a world that wasn’t working for everyone.” 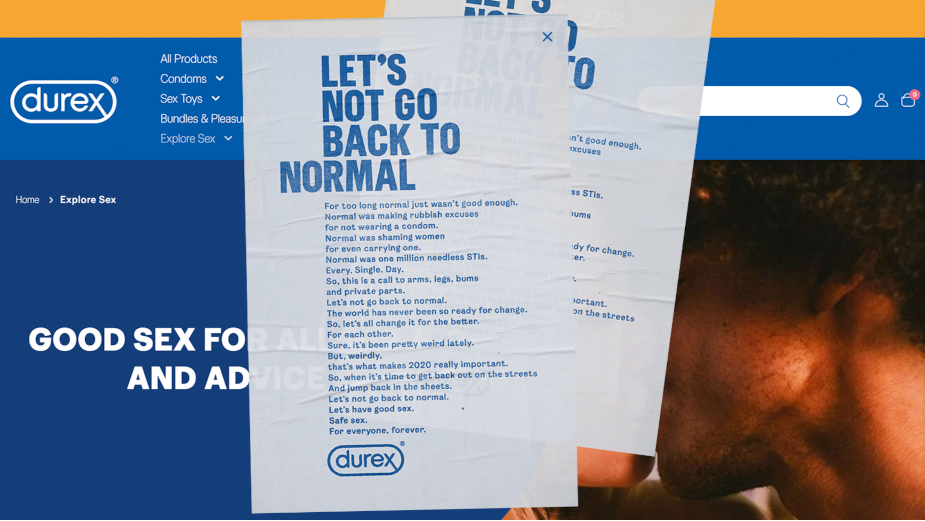 Elliot Harris, global executive creative director, RB and creative partner at Havas London, adds: “Lockdown has reframed our collective psyche from ‘me’ to ‘we’ – and it’s a more selfless, compassionate world that’s emerging from this crisis. We have the opportunity to do the same for sexual health, turning it from a chore into a must-have. Through this campaign, we want to empower people to talk freely and confidently about what they want – and to turn the condom into a symbol that says you care about protecting others as well as yourself. Together, we can shape a new future that breaks down barriers and tackles stigmas head on to help everyone feel more sexually satisfied.”
This campaign follows the launch of Durex’s major new positioning and visual identity, ‘Challenge the Norms’, earlier this year. The sex-positive brand relaunch positioned Durex as a mainstream activist against sexual taboos, stigmas and outdated, non-inclusive attitudes and instead vowed to showcase the ‘positive reality’ of sex.
Since the lockdown began, the brand has remained true to this tone of voice in an authentic yet contextually relevant way, with messaging including ‘We’ve been protecting people since 1929. Now it’s your turn’, ‘Come together, apart. You don’t have to share a bed to have great sex’ and ‘Staying in doesn’t mean you can’t explore.’
view more - Creative