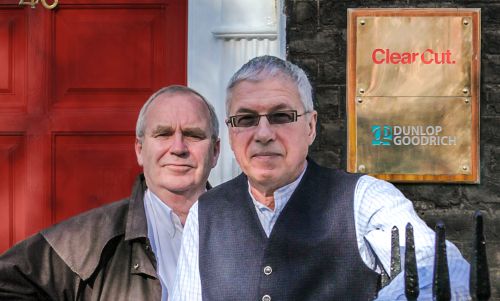 As part of being based at Clear Cut Bloomsbury, Dunlop Goodrich and Clear Cut will be combining their expertise in order to supply contracted promo services. This means clients can take advantage of Bruce’s 20 years of promo experience, combined with Clear Cut’s award-winning post-production staff.

Bruce Dunlop, founder, Dunlop Goodrich, commented: “We’ve produced 1000’s of promos, and so we know that Clear Cut’s infrastructure is second to none. Between Dunlop Goodrich’s creative producers and Clear Cut’s grading and mixing teams, we can offer clients top flight branding expertise at one of the UK’s leading post houses.”

Horacio Queiro, CEO, Clear Cut Pictures added: “It is very exciting for our two companies to be joining forces. It's a good example of how sometimes you can achieve more than the sum of its parts: with Bruce's experience in design, idents and promo production with BDA Creative, and Clear Cut's award-winning 21 years expertise in post, along with our combined graphics talent, we can tackle any promo commitment and deliver a better, faster, more cost-efficient result than any of the other players out there.”

Bruce Dunlop is ECD and co-founder of Dunlop Goodrich, a creative agency specialising in sports and promos.  He is also on the creative steering team at BT Sport. His founding partner at Dunlop Goodrich is Daryl Goodrich, an award-winning sports film director whose work includes the bid films for London 2012, and most recently the #menunited TV campaign for Prostate Cancer UK. Bruce was creative director of BSKYB from 1992-1998, before founding the broadcast, design and promotions company, BDA Creative.

Clear Cut Pictures has three facilities in London with over 60 cutting rooms, 10 dubbing theatres, 10 onlines, 3 grading theatres and graphics solutions; Clear Cut is the only postproduction company with sites in both West and Central London. Clear Cut has been the Broadcast Award’s winner of “Best Post Production House in the UK” and also won last year’s Royal Television Society’s Best Drama Sound award.