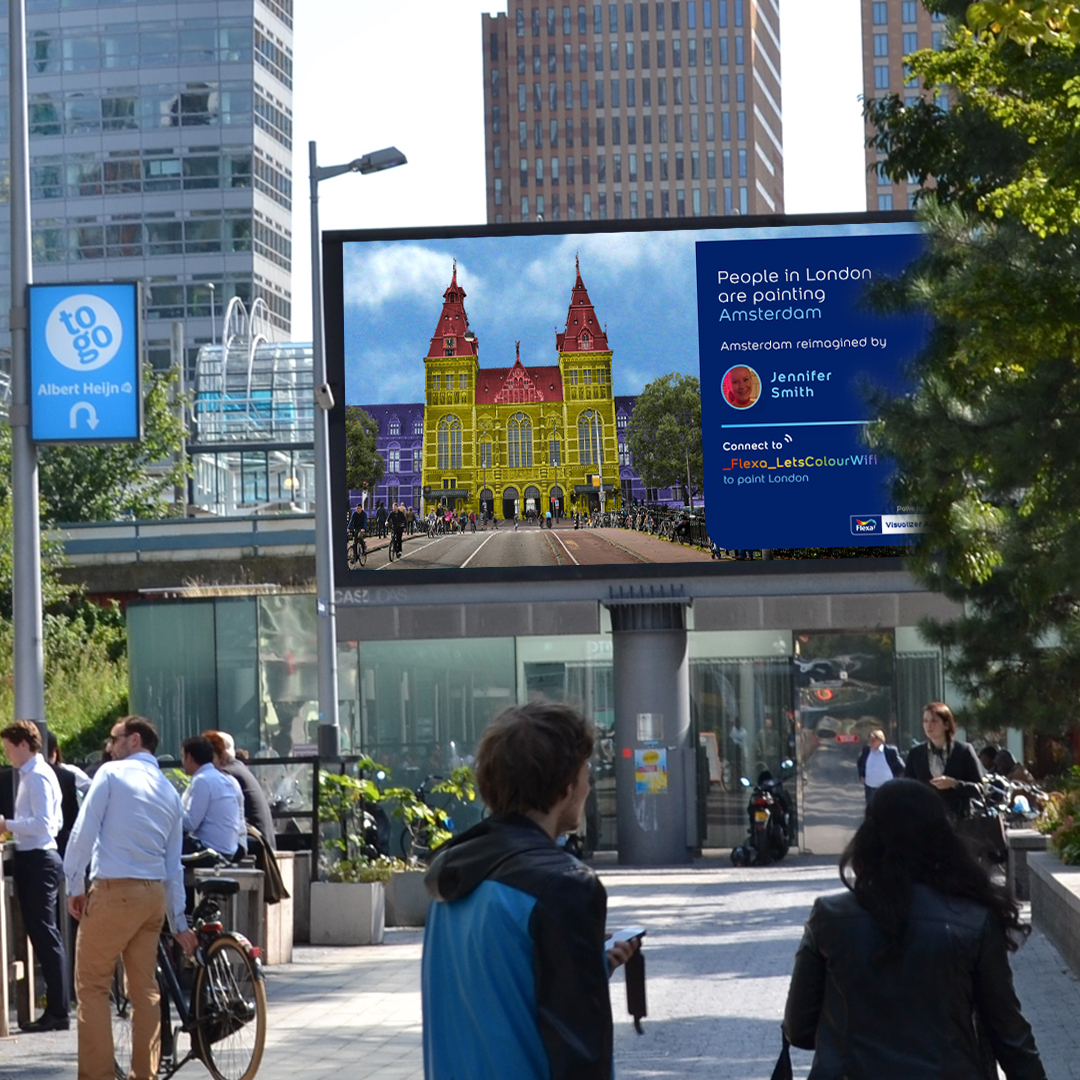 Dulux is inviting London and Amsterdam citizens to add colour to each other’s lives, using a live link connecting the two European capitals, powered by  Ocean Outdoor’s international alliance and the latest digital out of home technology.

Created by MullenLowe London, Let’s Colour won the International Prize in Ocean Outdoor’s annual digital creative competition which looks to push the boundaries in digital out of home (DOOH) advertising.

The eight-hour live stream connects both screens from 10am until 6pm local time on Friday, June 22.

Henrique Striker, global activations manager at Dulux said: “Paint and colour have greater power than people often realise. We believe deeply at Dulux that colour does more than impact the ambience of a room or building or area. It can connect people in profound ways. This work from MullenLowe and Ocean Outdoor is a wonderful expression of that, and a really exciting activation for the people of Amsterdam and London to get involved in. This work is also based on the same technology we apply to our award-winning Dulux Visualizer App: augmented reality! A great example of the wonderful things that can happen when creativity and tech come together.”

Alex Okada, creative director at MullenLowe London commented: “Colour and technology have the power to bring people together. This is especially important in the times we are living now. Winning the Ocean Outdoor competition allowed us to pull together these two elements in a unique way for outdoor media, connecting the cities of London and Amsterdam like never before.”

To make Let’s Colour possible, MullenLowe and Ocean have created the Visualizer App which connects participants to the screen in their vicinity, using fast wi-fi networks at both locations.

Once connected, the app allows participants to colour a landmark in each other’s city, choosing from a variety of colours from the Dulux paint palette.

The iconic sites in both cities that will be reimagined through colour are two of the cities’ most famous art galleries in Trafalgar Square in London and on Museumstraat in Amsterdam.

Once they have completed their masterpiece, individuals submit their image to their home DOOH screen, where it will appear alongside a selfie or image of themselves, their national flag and their name.

Their submission will then appear on the DOOH screen in the opposing city before it joins a colourful gallery of ‘People in London Painting Amsterdam’, and vice versa.

Let’s Colour participants will also have the chance to download and keep or share their creation on their chosen social channels.

Ocean Outdoor’s Head of Marketing, Helen Haines, said: “This winning campaign from Dulux and MullenLowe links London and Amsterdam for the first time ever in real-time using our digital out of home technology. It is original, friendly, bright and happy, and a worthy international winner of our annual digital creative competition.”