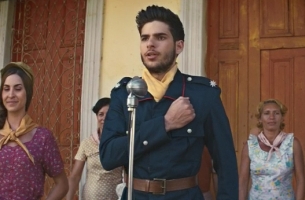 To promote the latest line of men’s hairstyling products, V05 and Havas Worldwide have released a clever pair of films which work in sync to tell a revolutionary story of hair-spiration. The Finish team were enlisted to complete the post on the project, adding the final touches to the two intertwined tales from South America.

The campaign films, are made up of pairs of 60” Cinema Commercials, 30” TVC’s and 20” VOD cut downs, in which each set of ads works as a Sliding Doors style narrative between a General and a Peasant on the search for hair-spiration.

The scene for the films, directed by Rob Legatt of Knucklehead, is set in an historic South America in which two men from starkly different backgrounds swap lives in a chance crossing. The change is orchestrated when they realise the power to shape their destiny is in their hands – in the form of V05’s Thicken Up Lifting Paste and Casual Control Rough it Up Putty.

Paul Harrison comments: “The brief for this grade was to create a unique and beautiful look to the films. They had to enhance the locations and wardrobe in a way that was cinematic but in keeping with the overall vibe of the images.”

Flame Artist, Steve Murgatroyd, adds: “It was instantly clear from the VO5 scripts that these were going to be very good films. I was, however, still amazed at how closely the graded conforms resembled what I had originally imagined from reading them. Cinematic, is a word often banded around cheaply but I think it comfortably describes what (the director) Rob Leggatt captured.”

Grand Central's Ben Leeves created the sound design for the spot: "My aim for the sound design was to highlight the two parallel stories and the opposite worlds that the two protagonists encounter on their journey. I wanted to give the spot a filmic feel and the sound really reflects and highlights what you see on the screen.

"I was brought in right at the start of the creative process and worked with the wider team during the narrative stages. We wanted the sound design to work on its own before we even started thinking about the music. Since there’s no dialogue, the sound design is the one constant that highlights the important elements and carries the story.

"It was great fun to work on such an original, clever spot. The 60-second versions are particularly beautiful - it’s a lovely campaign with a great creative idea at the heart of it."

The crucial aim for the post was to make sure both films exhibited the same style and environment to ensure the audience would make a subconscious connection between the two narratives.

Paul Harrison explains: “The two films interact with each other from different perspectives but maintain a number of key visual features, which included the grading palette, in order to make the narrative clear to the audience. Because of the intense detail needed to offer a sense of continuity, it was a very complicated grade as far as grades go. The final colouring of the images was a painstaking task as we had to continually look at everything in each shot and refer back to the films as a whole to ensure it worked with the overall palette.”

“As these films were big exterior shoots, time and light change throughout the day and have a major effect on the captured image. So it was a combination of great photography and sympathetic grading to achieve the final result.”

In contrast the Flame work was mainly invisible. Ensuring that the films were seamless with nothing out of place in the historic setting.

“The post for the films was relatively straight forward,” Comments Steve, “but given the length of the spots, not insubstantial. We had various bits of clean up, split screens and a number of pack replacements to do but the majority of the work involved layering photos of the general and the peasant characters into their respective posters.”

V05 give us a dose of their light-hearted humour with a simple but effective narrative which works intelligently in tandem to relay the style opportunities of the product.  Harrison’s grade seeks to pull both stories together with colour whilst Steve has directed the post to maximize on stylistic details.

Paul Harrison summarises the work: “I'm proud of both films, I think they look stunning, overall, the art direction, photography and grading have all played their part in making these films look great. I think we have done them justice.”

Steve adds: “It was rather pleasing to see how well the two edits actually mirrored one another and how satisfying it was to watch them back-to-back. I was very keen to work on this project and very pleased I did. I think they're great ads.”