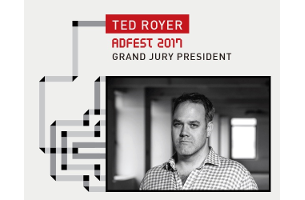 ADFEST is pleased to announce that one of the world’s most esteemed creative leaders, Ted Royer, Chief Creative Officer at Droga5, will join the festival’s 20th anniversary celebrations next year as Grand Jury President overseeing the 2017 ADFEST Lotus Awards.

Ranked by Business Insider as #1 of 30 of the most creative people in advertising in 2016, Royer has won more than 100 major awards in a career spanning 20-years. He joined Droga5 in its early days, but has worked all over the globe from Singapore to Argentina, Australia and New York.

“ADFEST celebrates its 20th Anniversary in 2017 so it is fitting to welcome a Grand Jury President who has made such an enduring mark on our industry over the past 20 years. Ted is a true visionary who continually taps into current trends to create the industry’s most talked-about campaigns. It’s an honor to welcome him to Thailand next year,” says Jimmy Lam, President of ADFEST.

Royer has played a pivotal role in growing Droga5 from fledgling start-up to an agency of 600 employees, which last year won both the AdAge and Creativity Agency of the Year accolades.  Prior to joining Droga5, he sat on the worldwide creative boards of Ogilvy & Mather and Publicis Groupe.

Says Royer: “I’m sincerely excited to be joining ADFEST in its 20th year. It is a festival that celebrates local cultures, yet demands global standards – I think this will make it a uniquely rewarding show to judge. I’m looking forward to seeing the ideas that are shaping the region’s future, and meeting some of the creators behind them.”

Vinit Suraphongchai, Chairman of ADFEST, says: “ADFEST 2017 will be a true celebration of all that has been accomplished in this rich, colourful region over the past two decades. We are so pleased Ted has accepted our invitation to come along and celebrate in the style ADFEST is now famous for.”

ADFEST 2017 will take place at the Royal Cliff Hotels Group in Pattaya, Thailand. Entries to the 2017 Lotus Awards are now open. For more information, visit www.ADFEST.com