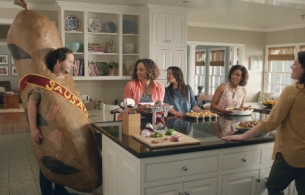 With the summer and grilling season just around the corner, Johnsonville and Droga5 are excited to launch the brand’s new campaign and position around family and how sausage brings us all together.

This hilarious campaign aims to let America know that Johnsonville not only makes sausage, they make family, and sausage. You see, for Johnsonville, it's the times we come together that make strangers into friends, friends into family and family even 'family-er'—and nothing brings folks together like Johnsonville sausage.

The brand’s first campaign with creative agency Droga5 launches with four TV spots titled: "Family Favor”, “Stay at Home Son”, “Grandma” and “Misunderstood”. These spots prove that Johnsonville can make a family out of anyone—and they do mean anyone! Even your work pals, your mobster neighbor, your 38-year-old son who’s still living with you or a kind-hearted drifter who wandered into your party.

Throughout the rest of the year, the fiery sausage maker will roll out other fun and humorous assets, such as a new app called the Brat Signal. The app lets family call family over sausage whenever they're grilling. But wait, there's more. Johnsonville is also going to launch “Bratfast in Bed” - a new Father's Day tradition that encourages families to kick off Dad's special day by giving him what he really wants and waking him up with a sizzling brat and a frosty brew. And let’s not forget about Bratsgiving: a day when Johnsonville capitalizes on everyone's favorite holiday, National Bratwurst Day, and gets folks ramped up to grill some plump, delicious sausages—or an excuse to celebrate another holiday.