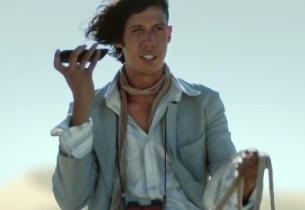 Droga5's 'The Longest Search,' is a 45 second film that tells the story of a young man on a quest for survival. It showcases the Moto G's impressively practical features, like an all day battery that make it such a reliable ally for the modern world. This is the first in a series of humorous and relatable films with supporting activity.

“The Longest Search" opens in the middle of an endless desert, our extremely dehydrated hero atop his camel. Searching, searching, scanning the dunes ahead of him–nothing but sand. In this moment, close to defeat, he pulls out his Moto G. Now we see him make the same search on his phone. But again, he fails. Finally, after expanding his search 20, 50, and then 100 miles he finds the ”source” of survival he’s searching for. Now, with renewed hope, an all day battery and a killer R&B track none other than R. Kelly's "Ignition" to keep him going, he journeys forward.