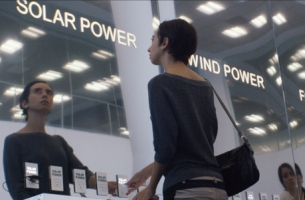 NRG today launched Power Behind the Plug, an evocative 90 second film and campaign that seeks to illustrate how people react when they actually take a moment to think about where their power comes from.

The goal of the film and campaign is to encourage every American to actively and consciously think about energy, how electricity is generated and their energy choices. This film, created with partner Droga5, is one of many programs that NRG has planned to help educate businesses and consumers to their choices along the path to a clean energy future.

“People today – especially in the U.S. – take electricity and the power behind the plug for granted, not giving it a second thought until the rare time when it’s missing,” said Sicily Dickenson, CMO and SVP, NRG. “As we race towards a clean energy future, we like to think that, given a choice, consumers would prefer sustainable energy solutions. But to get there, we’re taking a step back to build awareness that consumers even have choices as to how their electricity is generated. We are in the midst of a smart energy revolution and NRG plans to lead the charge in this journey.”

NRG is continuing to create cleaner, renewable and more sustainable energy so that businesses and consumers have access to choices when it comes to their energy and we can all pursue a path to a clean energy future. Today, fossil fuels are a large part of the energy mix in the U.S., whether you get your power from NRG or elsewhere, and the foundation of our nation’s current electricity grid system. This is how the majority of American’s keeps the lights on, gets to work and gets work done. For its part, NRG is pursuing long-term sustainability goals which include reducing carbon emissions by 50% by 2030 and by 90% by 2050. Power Behind the Plug, filmed at one of the country’s busiest airports, captures the footage from a unique charging station installation and an elaborate hidden camera network. The film crew set about capturing what happens when you give people a choice of where their power was coming from, just by putting a few words on the wall above the power supply: “Wind,” “Solar” and “Fossil Fuels.” Power Behind the Plug is intended as a thought starter to get people actively thinking about where their energy comes from.

Learn more about the energy options by following #SmartEnergyRevolution on social media channels and through the website, which is a valuable resource on how NRG is making better use of renewable and sustainable energy.