Droga5 NY and Philadelphia Petition to Save the Sad, Dry Bagel Emoji 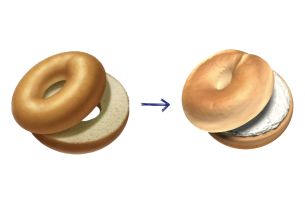 A week ago Apple and Unicode Consortium announced their release of 70 new emojis designs that will roll out in the iOS 12.1 update. Bagel lovers around the world rejoiced, thrilled to discover their favourite circular doughy treat was finally being immortalised as an emoji.

When they saw the design, their joy quickly turned to internet outrage. Not only did it look nothing like a proper bagel, this dry, sad bagel travesty was missing one crucial ingredient - cream cheese.

To raise awareness of this travesty, Philadelphia cheese teamed up with Droga5 New York and VMLY&R to launch a social campaign. They tweeted Apple and Unicode Consortium to inform them of their oversight and then launched a Twitter poll that garnered over 13,000 votes with 82% in favour of adding cream cheese.

The campaign then took things a step further by starting an online petition at change.org to further rally the online bagel loving community to put on the pressure and make their voices heard

Ten days later, Apple announced they had updated their bagel emoji to include cream cheese. Finally the internet was happy again and we ensured future generations wouldn’t have to look at a sad, dry bagel.