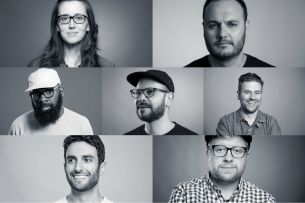 Jillian Goger joins Droga5 from McCann Erickson, where she spent nine years working on brands such as Dentyne Gum, MasterCard, Verizon and the New York Lottery, among others. Prior to her successful tenure at McCann, Goger spent six years at Arnold New York working on Hasbro, USTA and Nicorette. At Droga5, she is currently working on the Pizza Hut business.

Matt Swinburne also joins Droga5 from McCann Erickson, after 18 months of working on Verizon, USPS and the New York Lottery. Before McCann Erickson, Swinburne had brief stints in London, at Mother and Saatchi & Saatchi, and in New York, at Silver & Partners. He started his career in Auckland, New Zealand, and has worked at a bunch of agencies in the southern hemisphere, including DDB and Leo Burnett. At Droga5, he joins Jillian Goger on the Pizza Hut business.

Jake Shaw is a Creative Director with global experience, having worked in the UK, Germany and the US. Prior to joining Droga5, Shaw worked at BBDO Germany and New York, creating campaigns for many brands, including Mercedes, Braun, Mars Group, PepsiCo, Gillette, Visa and GE. At Droga5, he is currently working on Chase.

Ash Tavassoli is a Creative Director at Droga5 currently working on Chase alongside Jake Shaw. Tavassoli joins the agency after working at BBDO New York for four years on brands that include Visa, GE, Campbell's and M&M’s Chocolates. He has been recognised for his work on clients ranging from Campbell's and BMW to the Prostate Cancer Foundation. Most notably, he was awarded the Google/ADC Young Innovator of the Year award in 2011. A native of Toronto, Ash began his career at Doner Canada before eventually making the move to New York-based KBS+.

Ray Smiling joins Droga5 as a Creative Director on Under Armour after spending a year at 72andSunny working on Adidas’ global campaigns across football, American football and basketball. Before landing at 72andSunny in 2015, Smiling worked with R/GA on Beats By Dre, creating social content and national spots blending music, culture and sports. Before R/GA, Ray worked in the streetwear scene for two years, spearheading the advertising efforts for the New York City-based brand МИШКА, merging underground culture, music and art with fashion. He cut his teeth working for four years with Rockstar Games—the makers of Grand Theft Auto—on their early forays into social media.

Ryan Raab re-joins Droga5 after spending just over a year at BBDO New York, where he served as Creative Director on Foot Locker and Priceline. During his first stint at Droga5, Raab created award-winning work for Johnsonville, Jockey, Clearasil and Newcastle Brown Ale, picking up 21 Cannes Lions and being honoured as Adweek’s #1 Ad of the Year for Newcastle’s “If We Made It” campaign. Raab is currently working across the NBTY business. Prior to Droga5, Raab spent time at Mother New York and Crispin Porter + Bogusky, where he created award-winning work for Microsoft, Burger King and Domino’s.

Before coming to Droga5 New York, Michael Kleinman was a Design Director at AnalogFolk for over a year. Kleinman previously worked at Droga5 Sydney as a Design Director and M&C Saatchi as a Digital Design Director. His career highlights include designing the logo for the Oscar Mayer Wiener Rover, as well as the icon, interface and packaging design for the McDonald’s “Track My Maccas” app, which was awarded Gold by the Cannes Lions International Festival of Creativity in 2013. Kleinman is currently working on the Google business at Droga5.