The campaign took the form of a real-world and digital treasure hunt, which was targeted to different subcultures 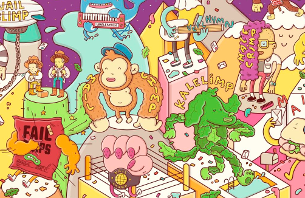 MailChimp’s first major marketing campaign, “Did You Mean MailChimp?”, began slowly rolling out last month, but it is not what you might expect from an established brand looking to say “Hello” and introduce itself to a new audience. Instead of the expected brand campaign, the company created an ecosystem of additive, artful and playful experiences.

MailChimp is the world’s leading marketing platform. Fifteen million customers, from small e-commerce businesses to major online retailers, use MailChimp to express themselves to the world and connect the right people with the right message, at the right time. As a company that has built itself on enabling small businesses to grow without compromise, the new campaign shows that MailChimp practices what it preaches: Being creative and true to yourself is good for business.

For MailChimp, that means having fun with its name in as many creative ways as possible, drawing on inspiration from its 2014 audio ad, popularised by cult podcast series Serial, in which people mispronounced MailChimp, ending with the now infamous “MailKimp?”

This inspired a collection of cultural activations, from creating hit singles and a new brand of potato chips, to starting fashion trends and making short films about singing sandwiches. MaleCrimp, MailShrimp, KaleLimp, FailChips, VeilHymn, SnailPrimp, JailBlimp, WhaleSynth and NailChamp all have one thing in common: They sound like “MailChimp.”

It may seem a random assortment at first, or in isolation, but collectively they form a highly orchestrated web of content guided by MailChimp’s belief that creativity drives business.

Starting a real-world and digital treasure hunt, MailChimp strategically created executions targeting different subcultures, with the intention that people may organically come across one or two parts of the campaign, piquing their interest enough that they would want to dig deeper. The accompanying web experience was created in such a way that anyone who stumbles across one piece of content can easily dive into a web loop of dedicated microsites, all intersecting with other parts of the campaign and ultimately leading to MailChimp.com/DidYouMean to connect the dots.

“We used mispronunciation as a creative device to inspire all kinds of different executions, knowing that people would be curious about what they were seeing and search for more information. Anyone who searches for MailShrimp or MaleCrimp is asked, ‘Did you mean MailChimp?’” said Mark DiCristina, Senior Director of Brand Marketing, MailChimp. “We have a history of not taking ourselves too seriously and having fun with our name, and this felt like a perfect way to introduce ourselves to potential new customers in a big and creative way.”

Advertising agency Droga5 created the “Did You Mean MailChimp?” campaign after being appointed Agency of Record in March 2016. This is the first campaign since the two companies began their partnership.

Neil Heymann, Executive Creative Director at Droga5, further added, “MailChimp is unlike any business we’ve ever worked with. They challenged us to reassess a lot of what we take for granted about advertising—including how we collaborate with our clients. It’s been a rare opportunity to create the kind of beautiful, strange, innovative work that their business is built on and that they encourage from their customers.”

A campaign with such a complex architecture required an equally complex media strategy, executed by media agency PHD. The media choices were vital, as the campaign asks the audience to connect a lot of dots. This meant ubiquity, context and frequency were critical, as well as creating a retargeting structure that tied everything together.

“When you’re working with a rule-breaking marketer, you need to work with media partners who are also willing to break the rules. The end product is the result of the perfect match of marketing and media mavericks,” said Ji Kim, Group Account Director at PHD.

The full campaign will run in the US and UK through the end of March.

To explore all the elements of the campaign, please visit www.mailchimp.com/didyoumean.