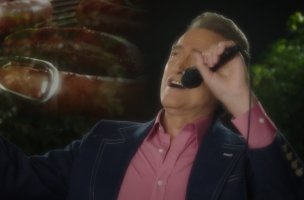 For the past few months, Johnsonville and Droga5 have been hard at work launching some pretty hilarious content. From the first spots introducing Johnsonville’s brand platform, “We don’t make sausage. We make family. And sausage”, to last month’s “Bratfast in Bed”, it’s apparent that sausage is on fire these days. And now we move onto another time to celebrate family and delicious Johnsonville sausage - The holidays! Turns out that Johnsonville’s favorite holiday is August 16, which is National Bratwurst Day, or better known to us as “Bratsgiving”.

In 2014, Johnsonville introduced the world to the magic and splendor of Bratsgiving. But, it became glaringly obvious that Bratsgiving would never become the undisputed best holiday of the year without a song. So, the sausage maker and Droga5 decided to compose the first Bratsgiving song, “The Ballad of Bratsgiving.” The agency even created an 80s-inspired music video to accompany it.