The first of the 3-part series, directed by David Gelb, is entitled 'Reserve What's Next' 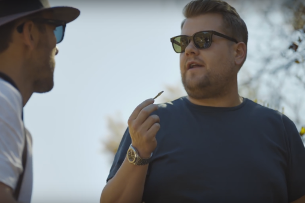 On the heels of the successful introduction of the Chase Sapphire Reserve credit card, Chase has teamed up with Broadway, television and film star, James Corden, to support the launch of the new Sapphire Reserve card.

Debuting today, Corden stars in “Reserve What’s Next,” a new three-part documentary-style film series that will explore cutting-edge experiences that are shaping the future of travel. Directed by David Gelb, the creator and director of Chef’s Table on Netflix, James will meet with visionaries who are changing the face of dining, transportation and accommodation. The first episode features Chef Mads Refslund, the Michelin-starred chef previously of Noma and Acme.

The second video (to launch later this year) features the team at Local Motors, a company literally driving the transportation industry forward with its unique approach to building on-demand, fully customised cars and autonomous vehicles. Along the way, James befriends a cognitive, self-driving shuttle and gets to design his very own 3D-printed car to drive around.

The third video will centre on an individual paving the way in the accommodation space.

The Reserve What’s Next film series strengthens the alignment of Chase Sapphire Reserve with its affluent consumer’s lifestyles and passion points, as well as the connected world within which they live.

To this point, the series debuted today and runs through the end of the year on “Meridian,” Vox Creative’s new travel site for which Chase Sapphire is the first exclusive partner. The videos will also run on Chase.com and YouTube, in addition to 15- and 30-second versions running through the end of the year on Condé Nast digital sites, as well as on Time Inc. sites like those for Food & Wine and Travel & Leisure magazines.