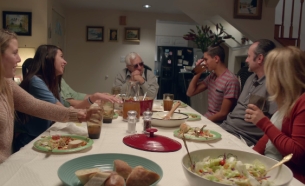 As a brand that’s been around the table with American families for over 100 years, Dixie knows the importance of spending quality time together. But, with our 1,000 MPH mentality in the modern world, there are even more distractions pulling us away from what really matters—­genuine human connection. Dixie recently commissioned a survey to uncover current attitudes and behaviors around the use of devices and other distractions during family dinnertime. The survey revealed that only 20% of 1500 respondents eat dinner as a family without distractions.

Dixie knows it can’t manage our work schedules or eliminate the chaos of our inboxes with a plate, but they can help us cut down the distractions we all battle during mealtimes so we can focus on the people around us. When you don't have to do the dishes, you can sit a while longer, tell another story and get a little deeper with your friends and family.

To kick off 'Be More Here,' Droga5 is launching 'Dark for Dinner,' a social movement that asks people to turn off their phones, cut out distractions and tune into the people at the table. Every Sunday, starting June 14, the campaign will encourage friends and families to return the focus to one another, 'be more here,' then come back online and tell share what they learned using the hashtag, #DarkforDinner.