Droga5 Crushes it in New Campaign for Dixie

The campaign sees the launch of 'The Crushtomizer' website 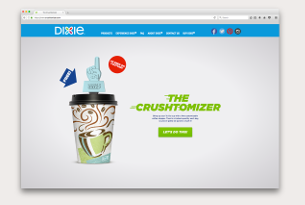 With its leak-resistant lid and super sturdy design, Dixie To Go cups are built for the millions of coffee drinking Americans who crush their mornings - from dad’s who serve up michelin star PB&J’s for their kids, to mom’s who captain minivans full of toddler-sized scream machines. But more often than not, these feats of awesomeness go unnoticed.

So Dixie set out to change that by launching The Crushtomizer - a website specifically designed to let these morning dominators flaunt how they crush it by designing their very own, very epic coffee stopper.

A benchmark achievement in coffee stopper augmentation technology, The Crushtomizer allows people to choose from a suite of designs, colours, and word combos so they can finally drink coffee and humble brag at the same time. Upon completion, their stopper design is sent to a small-batch, high-volume 3D printing facility where it’s created in real-time and then shipped to them free of charge.

Open on weekdays, stock is limited to a few hundred stoppers per day, after which The Crushtomizer “closes shop” before reopening the following day with fresh stock at 10:30am EST.

You can check out an accompanying video for the new campaign below: