Droga5 Crashes Its Own Ads in Self-referential Chase Campaign 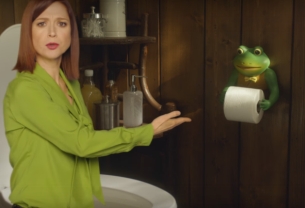 On April 18, Chase launched its latest advertising campaign to create awareness of their new Freedom Unlimited card’s simple benefit: cardholders earn 1.5% unlimited cash back on everything they buy. Every purchase, every time, everywhere. The campaign, entitled “Everything Unlimited,” developed in partnership with creative agency Droga5 and media agency Zenith, revolves around one hero spot and several partner brand spots starring Ellie Kemper. The spots take on the challenge of getting a message about buying out into a world already saturated with sales pitches.

From commercials to billboards to digital ads and Instagram product placements, people are constantly being sold to, even when they don’t know it. Droga5 wanted to have fun with this premise by fitting the Chase Freedom Unlimited brand and message into the world of selling.

The ads literally reference what's being sold all around them in a cheeky, self-aware way.  All the assets whether TV, digital or social reminding the audience that if they want to buy whatever is for sale, they can do so with the Chase Freedom Unlimited card and get 1.5% cash back on everything and anything.

Duncan Marshall, Creative Partner at Droga5, said: "The brief for Freedom Unlimited from Chase was one of those rare creative dreams - a terrific product with a simple promise - 1.5% cash back on everything you buy. With the insight that, as consumers, we are bombarded daily by thousands of selling messages on every conceivable media, we simply decided to immerse our message within and around them. With the help of the delightful Ellie Kemper, as well as several enthusiastic brand partners, we played with the world of the sell to promote our own."