PRETTYBIRD produces 'The Drew: No Excuse, Just Produce' focusing on the semi-pro summer league in LA 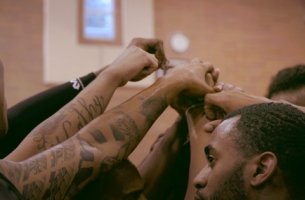 'The Drew. No Excuse, Just Produce,' just premiered in front of a packed house at the 2015 Los Angeles Film Festival. The compelling documentary focuses on The Drew League, a semi-pro summer league established in LA back in 1973. Co-directed by former NBA/UCLA player Baron Davis and Chad Gordon, the film details the rise of a passionate west coast mecca where the unifying, positive forces of family and community have held firm for over 40 years.

A mecca in the ghetto, The Drew League is recognized today as the nation’s premiere destination for pro-am basketball. Born in the crime and gang infested region of South Central LA, the hoops institution was initially created to get young kids off the streets and onto the court. The league quickly grew in scope to become a no-gang zone where members of the Crips and Bloods would play side by side in competitive harmony.

Davis and Gordon take time to give attention to less familiar names of the game, players such as Kenny Brunner, Tyrone "Big 50" Riley and legendary point guard Casper Ware Sr., whose son played for the Philadelphia 76ers. “It’s an incredible treasure chest of stories,” notes Davis, who played in the league before joining the NBA. “There were so many legends that I looked up to, and it’s important to let people know about the complete history and unlock all these great stories.”

Four years in the making, Gordon adds the doc took shape during the 2011 NBA lockout. “We were shooting a profile series on players during the lockout when the story picked up steam,” he explains. “Once we got [the league's longtime commissioner Dino Smiley] on camera, heard his amazing story and the history of the league it just made sense to piece the whole story together.”

Producer Erikka Yancy picks up on the film’s sense of community, herself attracted to the film’s positive values as the doc came together. “I was a hired gun,” she reveals. “But 8 weeks quickly became one year. I didn’t leave because the film holds such a positive message. As Baron says, ‘it’s something good outa the hood’ because stories on African Americans often focus on negative aspects such as crime, murder and death. But The Drew really is an amazing place, it’s a family to the whole community. The story was always going to be about fatherhood.”

“Coming from a personal place I never had a father,” adds Davis on the significance of the league. “In my journey The Drew and its community always had million dollar hearts. Everybody’s been a mentor for over 40 years. Basketball has really been my father, a place I turned to for mentorship. It was the same in the league for everybody.”

“At PRETTYBIRD we take on a variety of passion projects like this,” adds Ali Brown, PRETTYBIRD Vice President / Executive Producer on producing film of consequence. “The Drew is a completely home grown thing. To have a movie that shows so many positive thing – about kindness, love and family – is such a great message to put out there.”

“This film was made with lots of sweat and tears,” explains PRETTYBIRD Co-Founder / Producer Paul Hunter on the filmmaking journey, himself a revered director of commercials for brands such as Adidas, AUDI, Nike and Beats to name a few. “There’s a lot of love for the community and the sport. We hardly had any money and called in a lot of favors. It was tough because there was no schedule or permits during filming. It was a run-and-gun experience and get what you can get, but it came together so damn well.”

“This film comes from the heart,” closes Davis. “This is the story of a different kind of basketball legacy that was born at the corner of Compton and Firestone. It’s how we get down here on a basketball level. It’s about heart, community and honoring the ambassadors of the game.”