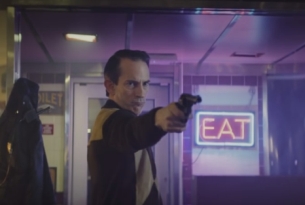 This year, the World Health Organization’s World Health Day, marked on 7 April 2016, focused on the fight against diabetes. About 350 million people worldwide suffer from diabetes, and that number is expected to double in the next 20 years. By 2030, diabetes will be the seventh leading cause of death in the world.

A great many diabetes cases are preventable: simple lifestyle changes (diet and exercise) have been shown to be effective in preventing type 2 diabetes or delaying its onset. Developed by a group of artists and communication professionals working out of London and Milan, the Food for Thought project tackles the risks connected to poor diet. The centerpiece of the project is a short film directed by Davide Gentile and produced by Banjo Eyes Films in collaboration with Dude, Evolution People and Flaxman Films.

The title of the film is a deliberate double entendre: a poor diet is something which needs to be taken seriously. The atmosphere is somewhere between Tarantino and the Coen brothers; the story tells of the effects of a poor diet in literal terms – death. Rather than being a direct attack on junk food in itself, the film is a warning: an unhealthy diet, combined with the absence of physical activity, produces millions of silent deaths around the world. They may not make the headlines, but they cause pain and suffering just the same.

The film links to a website which tells the story of the project and the characters. Each of the characters is linked to a potentially harmful food group like fat, sugar and salt, which can kill if consumed to excess. They can kill - that’s the theme of the film.

The Food for Thought project is self-funded, does not promote any particular remedies and is more creative than scientific in nature. More than anything else, it is an alarm bell intended for people - who can change their habits - and institutions - which can do a lot to promote healthier lifestyles.