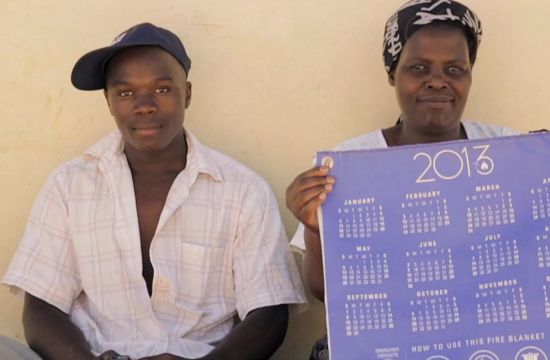 Draftfcb and Hellocomputer are flying high over the Mother City following their performance at The Loerie Awards 2013 held in Cape Town this past weekend (September 21 & 22).

Their tally on the first evening of the two-night strong event included one of only two Grand Prix awarded on the night, four Silvers and four Bronzes.

Draftfcb Cape Town’s Engen ‘Fire Blanket Calendar’ was the recipient of the Grand Prix. This work, which had won Silver for the agency earlier this year in Cannes, also received an Ubuntu Silver.

“We’re obviously delighted about our Grand Prix – what a thrill to receive the first awarded at this year’s ceremony. Engen’s Fire Blanket is an idea that has caught the world’s imagination, and we look forward to a long life for the initiative,” said Draftfcb Cape Town Executive Creative Director, Mike Barnwell.

“Furthermore, adding our awards at the Pendoring Awards gives us a ‘Royal Flush’ for the weekend – a Grand Prix, Gold, Silver and Bronze! That’s also quite special.”

The full list of awards going to Draftfcb agencies on the night were:

Celebrating the agencies’ successes on the first night of the event, Hellocomputer managing director David Moffatt praised the teams in both the Johannesburg and Cape Town offices saying that they’d innovated in the strategic, the creative and the technical spheres.

On the second evening (Sunday September 22), which awarded the above-the-line categories, Draftfcb added more Loeries to the tally, all awards coming from the radio category.

The group’s performance at Loeries follows a spectacular result at the Pendoring Advertising Awards, held on Friday (September 20). Here, it won a total of seven awards, including the Prestige Award.

Taking it and clients to the stage were Draftfcb Johannesburg’s campaign for Toyota ‘Taai Oumas, Taai Tieners, Taai Meisies’, which won the Prestige Award as well as a Radio Gold.

Chief Creative Officer Brett Morris praised the teamwork which resulted in the wins over the weekend.

“Draftfcb has a well-deserved reputation of crafting South Africa’s favourite advertising and, in doing so, building the country’s favourite brands. The fact that we consistently produce advertising that resonates with ordinary South African’s is testament to single one of the people that work for us. We’re a meritocracy, not an autocracy.

“And we’re very proud to draw on our experiences as ordinary South Africans to win the hearts and minds of the consumers that matter to our clients.

“We love ideas that matter to ordinary South Africans and we care deeply what they think because they are the ultimate judges of our work, they are the ones who decide whether our work is a success.

“And, we don’t just create South Africa’s favourite advertising in English, we do so in many of South Africa’s official languages, as our performance at both Pendorings and Loeries this weekend shows,”  said Morris.

“It is very important for us to be recognised for producing great work in indigenous languages and around truly South African issues, such as the Silver Ubuntu Award for Engen Fire Blanket and the Bronze for Operation Khanyisa.”