Dr Who Takes NZ to the Moon

Draftfcb sends 50 kiwi voices over 750,000 kilometres through space and time 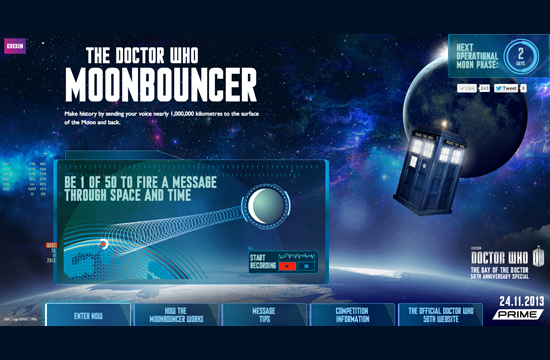 New Zealanders have never been closer to making contact with Earth’s mysterious celestial neighbour as they are today, following the announcement by Prime to send 50 kiwi voices more than 750,000 kilometres through space and time to celebrate Doctor Who’s 50th anniversary.

For the first time in history, 50 lucky individuals will send a piece of themselves, via voice message, to the Moon. They will experience the wonders of outer-space communication using moon bounce, a rare method developed by the US military in 1940 which is currently practised by only a niche group of radio astronomy specialists.

Prime has partnered with one such specialist to launch a competition today, enabling entrants to record their most amusing and creative messages.

Fifty of the best recordings will be propelled into the lunar body to celebrate the 50th anniversary of the world’s longest running science fiction programme, Doctor Who, and launch the anniversary episode, ‘The Day of the Doctor’.

Doctor Who fans can enter their messages via the online Moonbouncer at www.primetv.doctorwhomoonbouncer.co.nz or by calling 0800 TARDIS from November 5 until November 13, 2013 and will be notified by Prime if their message is one of the winning entries selected to be moon bounced.

“Prime is known for its quirky take on pretty much everything and we are always looking for ways to not only excite our viewers, but enable them to participate in activities they might otherwise never have the chance to.

“This is an awesome, fun opportunity and a terrific way to acknowledge a true milestone for one of the greatest television shows of all time, and something that our fellow Doctor Who fans are already getting right behind as our recording line has been inundated with great messages,” says Prime’s marketing manager Kate Whittle.

The invention of moon bounce is credited with opening the possibility of radio communications beyond the Earth for space probes and human explorers, and involves sending an audio message to the Moon’s surface where it is then bounced back to an Earth-based receiver in a matter of seconds.

Founder of local Doctor Who fan site, 0800tardis.co.nz, Sam Somers, says, “It is incredibly exciting to be able to take part in this highly specialised and rare opportunity. I can’t think of a better way to launch the 50th anniversary episode of Doctor Who in New Zealand than to send a part of ourselves to the Moon and back.”

Depending on the stage of the lunar cycle and the position of the Moon, voice messages return back to Earth with varying levels of galactic distortion.

The returned messages will be heard on the website following the close of the competition, and a top few will be selected for use in radio to promote the 50th anniversary special.

The New Zealand television premiere of the 50th anniversary episode of Doctor Who, ‘The Day of the Doctor’, will appear exclusively on Prime on November 24, 2013.