Dr. Don Invites You to Slow Down & Drink It In with New Belgium Brewing Films 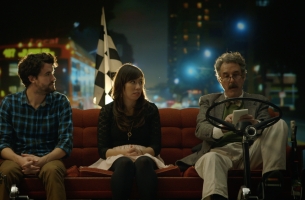 Directing collective and production company Strike Anywhere invites the world to Slow Down (and raise a glass while you're at it) in their web films for New Belgium Brewing. Strike Anywhere worked directly with New Belgium to create a content series that entertains audiences and introduces their new Slow Ride Session IPA to the marketplace.

The content is anchored around an easygoing therapist named Dr. Don, who is on a mission to pump the brakes on the hectic pace of our lives so we can slow down and smell the hops. With a warm manner and a comforting moustache, Dr. Don gets individuals to hitch a leisurely ride on his mobile therapy couch. There he provides a variety of solutions for their interpersonal problems.

New Belgium created the custom couch bike and encouraged Strike Anywhere to build a character and world where audiences could experience the bike and the beer in an absurd way.

Starting with a teaser, we meet Dr. Don at the brewery in Fort Collins, Colorado. There we learn his mission and creed. Viewers are invited to “Get Ready to Go Slow.” Each of the following episodes centers on therapy sessions with people who decide to seek out New Belgium’s unconventional (and unlicensed) doctor for a slow ride and a solution.

In the debut episode “Couples Therapy,” a couple learns the meaning of lasting love on their first date. The forthcoming episodes feature two roommates finding peace in the home, and an employee who gets his uptight boss to loosen up with the help of the doctor and a harmonious tune.

Working beyond the traditional role of a production company, Strike Anywhere created the characters and built a unique visual style to anchor the pieces throughout the campaign. While humorous in nature, the content also points to the brand messaging for New Belgium and their new IPA: a heavily-hopped session India Pale Ale that invites a slow-going and relaxing session.

Writing and casting were key components to the project. Strike Anywhere created scripts that were flexible for the improv actors to play within. Casting the project on their own through a network of sketch comedy groups in LA, they found individuals who could bring something to the scripts in terms of character and dialogue rather than just a look.

To add another layer to the world, Strike Anywhere used rear projection to make the pieces just a hair more absurd.  By editing the background loops with footage – some of it shot by Strike Anywhere, some licensed – they were able to switch the environments on the fly and allow the actors to react simultaneously to places they were transported to in the stories. The subtle touch lends a consistency to the campaign pieces and heightens the “off-factor” without distracting the viewer, while the addition of appropriately quirky Muzak-inspired audio and a skillful edit pedal this web series at a perfect pace.

“New Belgium was fantastic to work with every step of the way.” Says Strike Anywhere EP and filmmaker Ryan Simon. “From ideation, to on set, through post, they brought fun ideas to the project. It felt like a great creative collaboration with the brand.”

“We had a blast working with Strike Anywhere,” said New Belgium Spokesman, Bryan Simpson. “They immersed themselves in our brand and culture, they nailed the promise of Slow Ride Session IPA, and they turned the vision into surreal works of comedic gold. Great process and fun project through and through.”