Campaign celebrates education in the slums of Mumbai 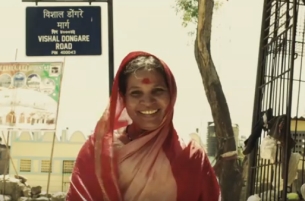 As you can imagine, it’s not easy being a kid in the slums of Mumbai. Life is tough, parents often work day and night but barely make enough to put food on the table. On the other hand, the goons and slum lords seem to have all the time, money and respect a child could want. Unfortunately, without other role models, the criminals are who the children begin to look up to and school falls by the wayside.

FCB Interface and Door Step School sought to give these impressionable kids new role models, and while doing so, get them to believe in education and making a better future for themselves. Streets in India are named after famous people but the slums of Mumbai are a maze of hundreds of narrow, crisscrossing streets, many without names. The campaign named streets in Mumbai’s Ambedkar Nagar slum, home of more than 2.4 million people, after the best academic performers in school. The children were celebrated in a road naming ceremony with the community and celebrities in attendance.