Don't Watch This New Canon Film If You're Afraid of Heights 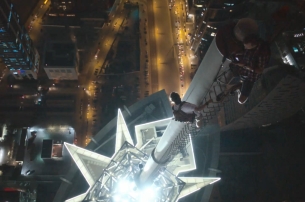 Vadim Makhorov and Vitaliy Raskalov are two Russian photographers and city explorers also known as “on the roofs”. Looking beyond familiar sights, they search for unique and spectacular photos that can only be captured from the tallest buildings and that they instantly share with their community.

Canon and J. Walter Thompson followed the pair on their latest climb in Dubai, where they took on the JW Marriott Marquis - the world's tallest hotel - a 72-story, 355 m twin-tower skyscraper.

The new campaign includes film, digital content, press and outdoor. The online hub displays the vertigo inducing images that they took along with genuine useful content: tips, techniques and tutorials.

Once again, the Come and See campaign invites people to look a little bit deeper and explore further.