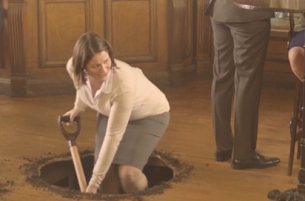 This weekend The Mirror launches its next burst of brand activity “Don’t Say Stupid”, part of an ongoing campaign reinforcing its intelligent tabloid credentials.

The cross platform, multi-million pound creative campaign “Don’t Say Stupid” brings to life the sinking feeling people experience when they state something they’ve read as fact, only to realise it’s obviously not true when challenged by others.

It intends to highlight the urban myths, speculation and mistruths reported as fact in most popular press and shared via social networks – to reinforce the Mirror’s point of difference as a quality tabloid news source.

The campaign will run for a number of weeks across TV, print, digital, outdoor, mobile and social platforms with a primetime TV launch spot in ITV’s Take Me Out on Saturday 7th February, and with other key spots including Coronation Street and Saturday Night Takeaway.

Voiced by Sara Cox, there are three TV creative spots which see a number of characters regurgitating something ‘stupid’ from what they’ve read, only for the penny to drop after awkward looks from their peers, causing them to backtrack, mumble on awkwardly, or seek a hasty exit.

The creative was developed and produced by the creative agency and production company Quiet Storm. The media agency is Carat.

Trevor Robinson OBE, creative director, Quiet Storm said: “The Mirror is a respected news brand that’s trusted by millions and that has an intelligent and engaged readership. In our creative, we wanted to show this in a way that everyone would recognise – and that felt playful in line with The Mirror’s sense of humour, alongside its credible positioning as a news brand.”

Zoe Harris, group marketing director, Trinity Mirror Group, said: “In the Mirror’s own style, this campaign is a playful way of tackling the awkward truth of media-driven ignorance and aims to reinforce our position as the UK’s intelligent tabloid, an agenda we first set about communicating in 2013 with our hugely successful #MadeUThink campaign. The Mirror matters to what we call Modal Britain – we’re not about aspiring to an intellectual elite, or patronising a so-called underclass - but talking about the things that matter to normal people with enquiring minds.”