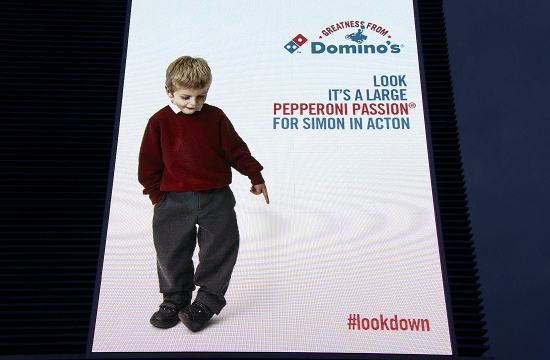 The initiative utilises the highest technology DOOH screens so that each time a Domino’s Pizza delivery bike passes by, a real-time, bespoke message quickly appears in time for drivers to see. In the message a child appears, pointing downwards at the bike, with an accompanying strapline such as ‘Look, it’s a Large Pepperoni Passion for Simon in Acton’. 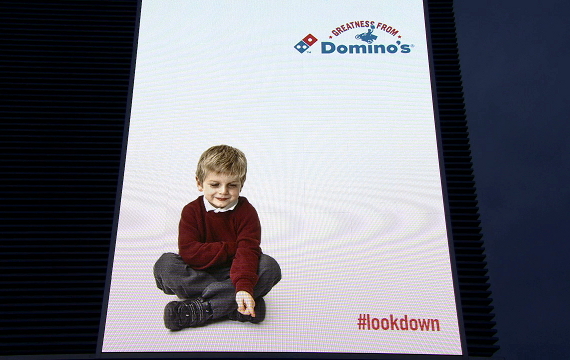 Henry Daglish, MD at Arena, said: “We have just loved having some fun with this engaging campaign. It just works with a brand like Domino’s. We want to thank our client who is always prepared to let our ideas fly!”

Nick Dutch, Head of Digital at Domino’s Pizza, added: “The lookdown campaign was a fantastic chance for Domino’s Pizza to recapture the fun and passion that’s at the core of everything we do. I’m delighted with the results and think people will really respond to the light hearted humour at the heart of this creative idea”.

A specially created video to accompany the ad will be posted on the newly unveiled Domino’s blog, also by Arena.

The campaign location capitalises on Clear Channel’s ‘Storm’ site – the 'A40 Power Station' – with it's a 7.5mx5m billboard. It is the latest initiative in an ongoing series of innovative media campaigns created by Arena and Domino’s Pizza, including utilising NFC technology; The Support Group online mini-series; and the Domino’s Blog.