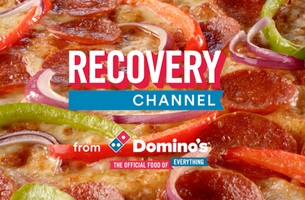 After going “out-out” on the 31st December, Domino’s, the nation’s favourite pizza, gave everyone the ultimate reason to stay “in-in” with the Recovery Channel. The perfect accompaniment to that much-needed Domino’s delivery, cementing its place as “The Official Food of Recovery” on New Year’s Day.

The Recovery Channel was a one-stop-shop for soothing, relaxing programming, and required absolutely no brain power. People could sit back and enjoy the ultimate duvet day, pizza in hand, with a fantastic 24 hours of watching this specially curated content. You could enjoy everything from calming nature scenes including a mock ‘live stream’ and sunsets, or a crackling roaring fire, to cute animals on ‘YawnTube’, as well as helpful hints and tips to de-stress.

This unmissable TV takeover was shown on Sky: 539, Virgin: 269, Freesat: 164 as well as TV Player, YouTube, TVPlayer, TVGuide and Zattoo. Promotion ran beforehand through social media, digital channels and eCRM.  The TV channel booking was undertaken by Arena Media, and The Academy will be handled the consumer media launch of the campaign.

This is the first campaign since Domino’s Pizza Group (DPG) appointed VCCP as its lead digital agency for the UK and Ireland in November, following their appointment as Domino’s lead creative and strategic agency in April 2017. The new manifesto, “The Official Food of Everything”, launched in September and became the third most watched advert on YouTube that month despite only launching on the 25th.

Tony Holdway, Sales & Marketing Director for Domino’s said:  “We know that New Year’s Day can be a struggle for some and for that reason we are excited to be able to provide 24 hours of non-stop entertainment. Taking over a TV channel for a day is a bold move, but I’m confident that the Recovery Channel will become the official channel for the 1st January. The same way that Domino’s pizza is The Official Food of Everything, including days when you don’t leave the sofa.”

Pete Grenfell, Managing Director, VCCP Partnership added: “Domino’s is an iconic brand, which deserves ideas that can help to re-enforce this status. The Recovery Channel is exactly that. An idea than spans digital, social and advertising to create a memorable (and relaxing) start to the year for both viewers and the brand.”

Sarah Treliving, Managing Director of Arena Media, said: “2018 marks 20 years of our relationship with Domino’s and I can’t think of a more appropriate way to kick off this landmark year than with this brand new and really innovative idea.”

“Domino’s is synonymous with relaxing at home with friends and family, and when you add the Recovery Channel’s offering into the mix, I defy anyone to want to leave the house this New Year’s Day.”