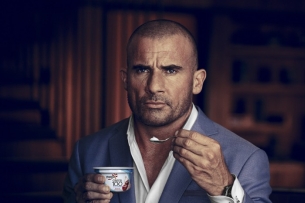 Dominic Purcell is known for acting rugged and tough. Yoplait Greek 100 yogurt is known for being smooth, creamy and sometimes fluffy. So, you probably wouldn’t expect the two to be paired up in an ad campaign, right? Well, the Yoplait Greek 100 brand team and Wieden+Kennedy wanted to clear up some misconceptions about Greek yogurt and they enlisted Purcell to help them get their point across.

Purcell, who is best known for his acting roles as a beefy tough guy, shows a softer side in the new Yoplait Greek 100 campaign where he portrays “A Man of Yogurt.”

Despite the serious look that never leaves his face, A Man of Yogurt doesn’t take himself too seriously, as he uses words like tum-tum and fluffy cloud to describe his love of Yoplait Greek 100

And A Man of Yogurt isn’t afraid to call out those who think Greek yogurt is too heavy or tart. In one spot, that will help extend the campaign in the coming weeks, A Man of Yogurt explains, “You don’t know anything about Yoplait Greek 100 Whips! The texture’s quite light. It’s like a delicate lace embroidery you dip a berry into. Go ahead, dip the berry.”

“What we like about A Man of Yogurt, and Dominic in particular, is that he’s a nuanced character,” says Cody Wolkowitz, associate marketing manager, Yoplait. “It’s fun to see the unique attributes of the product applied to our ‘tough guy.’ Yes he’s intense, but Yoplait Greek yogurt brings out his softer side, which we found funny.”