Domestic Abuse is Exposed in This Powerful Video Activation 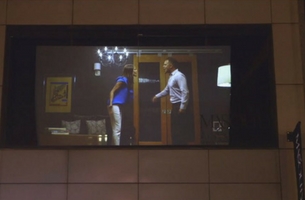 The Assaulted Women’s Helpline (AWHL) in partnership with Giants & Gentlemen (G&G) launched a project designed to raise awareness about violence against women. This project, a video activation and social media campaign, will kick off a general awareness campaign and difficult discussions ahead of Woman Abuse Prevention Month in November.

“Abuse is that dirty secret that unfortunately touches many lives, but that few want to talk about,” says Alanna Nathanson, Co-Founder and Creative Director at Giants & Gentlemen. “We wanted to help the AWHL shed light on the issue and raise awareness as to its pervasiveness. As an advertising agency, the best way for us to do so was with a creative solution: we found an arresting way to bring attention to the fact that abuse can happen to anyone, anywhere.”

AWHL and G&G want to shift preconceived ideas that this form of violence only happens to certain societal groups. Domestic violence and spousal abuse costs Canada $7.4 billion per year (CCPA) and can have an impact on generations to come. Long-term impacts on families can turn into mental health issues and, commonly, loss of life.

“Every six days we lose one woman to violence in the home,” says Huong Pham, Executive Director of AWHL. “It is important to remind people that violence against women is still on the rise and something that typically happens to the ones we love, behind closed doors.”

Leading up to and throughout the month of November, AWHL will be promoting the services that are available to support women who are in difficult situations at home. While domestic violence is not seasonal, the push for awareness and support is instrumental in raising much needed awareness throughout the year.

“Giants & Gentlemen approached us with this unconventional concept. From start to finish they have been instrumental in carefully developing this pro-bono activation,” says Pham. “Seeking a grassroots charity partner with the challenging task of building awareness for violence against women, Giants and Gentlemen have created an impactful and thought-provoking awareness campaign for us.”

• Sheila Phillips – Chair, Board of Directors