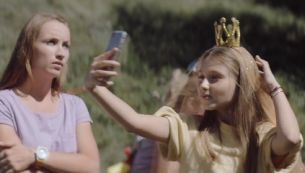 Mars Food has released the latest advert in its Dolmio “No drama™” campaign. Building on insight that gathering the family to the table for dinner can be the most difficult task parents face every day. ‘The Battle of Dinnertime’ film brings to life a dramatic metaphor for the myriad of dramas all parents face at mealtimes.

The film introduces two armies; one made up of parents, the other all their children. We see an epic confrontation between the two sides across a ‘battlefield’ where they clash to try and persuade them to come to the table for dinner. We see the massed ranks of beleaguered parents battle in vain for the attention of their otherwise preoccupied children.

Thank goodness then for no nonsense Dolmio Spaghetti Bolognese which brings peace and order to the chaos.

Clare Dawson, Marketing Director, Mars Food, said: “We wanted to showcase the challenge for parents of trying to get their kids to sit down at the dinner table – bringing the struggle to life in a fun and creative way. We know that Dinnertime can be hectic and that’s why our products provide quick and easy options that the whole family can enjoy.”

Michael Jones, Creative Director, AMV.BBDO: “It was a genuine pleasure to bring to life the daily dinnertime struggles of parents everywhere on such an epic scale.”

The Battle of Dinnertime is created by AMV BBDO and is the third advert from the “No drama™” campaign. The advert aired in the UK on Sunday 16th September across all major commercial channels, as well as online.