Dolmio Campaign Reclaims Dinnertime from the Clutches of Technology 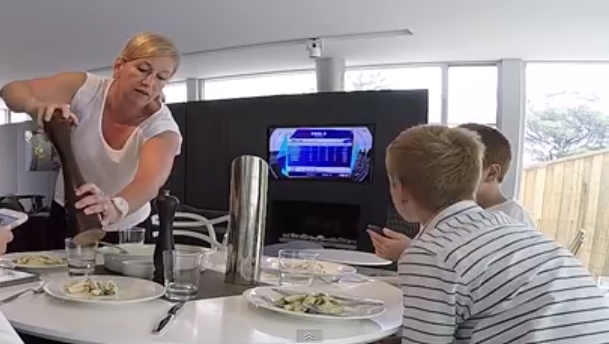 Dolmio has launched a new campaign to win back family meal times from the over use of technology at the dinner table with the launch of the Dolmio Pepper Hacker.

Responding to research investigating Australians’ dependence on technology, which found that two thirds of Aussies households report arguments from over use of technology at dinner, and four out of five (78 per cent) saying it should be banned at the table, the new Dolmio campaign seeks to help more families connect at dinner time with the Dolmio Pepper Hacker.

Aside from seasoning your spaghetti, the Dolmio Pepper Hacker has another very unique secret feature. With one twist the seemingly normal pepper grinder will power down TVs, shut off Wi-Fi and mobile apps, taking away the dinner time distractions.

To demonstrate how families connect when they disconnect, Dolmio provided frustrated Aussie mums with a Pepper Hacker to help them reclaim dinner time and stop technology commandeering their family time. Dolmio secretly filmed the reactions of the technology obsessed families once their tech was switched off and dinner was served.

Richard Stear, marketing director at Mars Food Australia says, “We believe that meals shared with family and friends are often distracted by the very technology that is supposed to bring us closer together, so we’ve created the Dolmio Pepper Hacker to help connect us with the people in front of us.”

He adds: “The Dolmio Pepper Hacker might not be available to every household yet but we believe that our experiment perfectly shows that once you disconnect from your technology at the dinner table you can really connect as a family.”

“I have three daughters, aged four to 13, and I can tell you that the more connected the world is, the more disconnected we are at home. If I've got a problem with my iPad, I hand it to my four year-old to fix it for me,” said Paul Nagy, executive creative director, Clemenger BBDO Sydney.

“Dolmio wanted us to reconnect families at dinnertime, so naturally we crossed a pepper cracker with something like an EMP (one of those electromagnetic bomb things that knocks out anything technical) and created the Dolmio Pepper Hacker. Seriously, we did. One turn of the grinder and you don't just get a sprinkle of pepper - you get 30 minutes of tech-free, uninterrupted family time - whether they like it or not. Having used it at home for a couple of weeks now, I can whole heartedly say it is one of the greatest things I've ever been a part of creating. Dinnertime is fun again.”

Technology distractions span far beyond the traditional family setting too, ruining mealtimes for millions of Aussies. The research also highlights that one in three people have been involved in a technology tiff around phone usage during a meal with a partner. Furthermore, more than twice as many men admit they have been told to put down their phone during a meal by their partner compared to women (22pc versus 9pc).