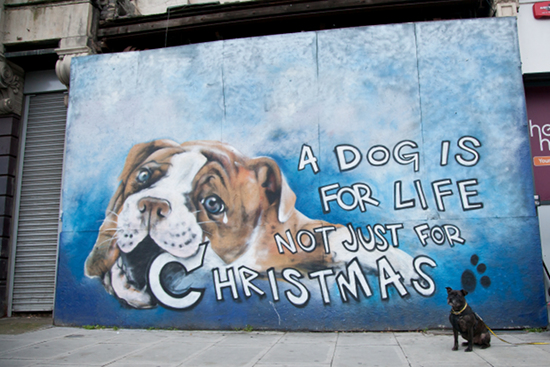 Three of Britain’s best street artists - Jim Vision, Teddy Baden and Barney Zadok - have unveiled a street art collaboration with the UK’s largest dog welfare charity, Dogs Trust, designed to take its iconic slogan “A Dog is for Life, not just for Christmas®” to a wider audience.

The artists were commissioned to create their very own artistic interpretation of the charity’s iconic slogan, which celebrates its 35th anniversary this December. Sadly the phrase is still as relevant today as ever and continues to drive the message about responsible dog ownership.

With slogans appearing on the streets of London and Liverpool, it is hoped the art will capture the attention of passers-by, reminding them of the slogan’s importance in the run up to Christmas and ultimately stop people from ‘impulse buying’ a dog without fully understanding the commitment needed to look after it. 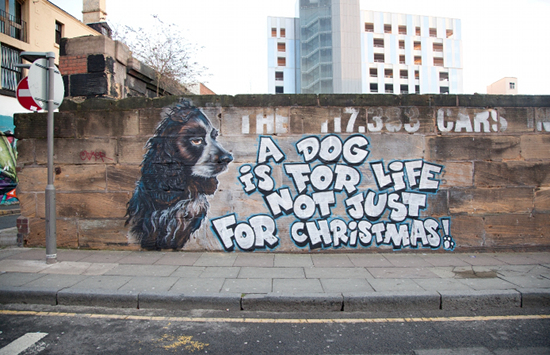 Dogs Trust CEO, Clarissa Baldwin OBE, comments: "The 35th anniversary of the slogan is a milestone we want to highlight and it made sense for us to work with Jim, Teddy and Barney who have helped us reach a new audience with each of their own unique and wonderful artworks. We're delighted with the results and hope it makes passers-by stop and think about the meaning of the slogan at this important time of year.”

Teddy Baden, a street artist famed for artworks featuring dogs as his muse, said: "It was really important for me to be part of this project, as dogs have been at the centre of my street art for years and are a great love of mine. I wanted to make sure I did this iconic slogan justice through my art and really make people think twice about taking on a dog if they know they can’t give it the life-long care it deserves." 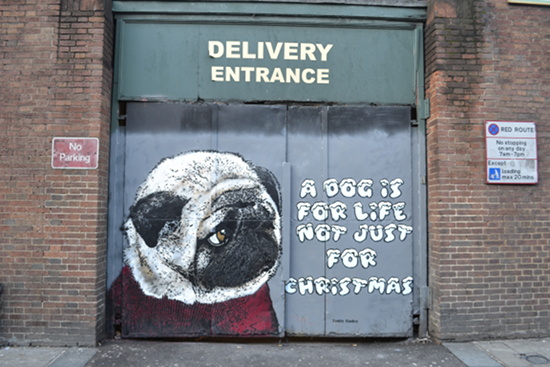 Dr Zadok, a street artist who used his own family dog as inspiration for his piece, added:
"Alfie, who I have featured, is my parent's dog and he's been a much loved part of the family for 12 years. Making the decision to own a dog is an important one that people should think carefully about it."

Quote from End of the Line said: "We jumped at the chance to work with Dogs Trust - we're all huge dog lovers at End of the Line and we collectively can't bear the idea of dogs being abandoned. If, by a few people seeing our work, they stop and really consider what it means to take on a dog, then we've succeeded."

The Dogs Trust ‘Slogan on the Street’ art can be seen at the following locations this December:

The idea was devised by the Dogs Trust Team at Eulogy! – the agency behind the PR push to celebrate the 35th anniversary of the slogan ‘A Dog is for life, not just for Christmas’