Does Adland Need a Rebrand?

Trends and Insight 195 Add to collection 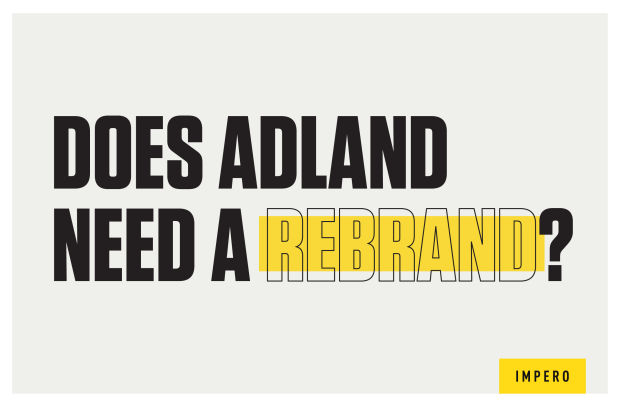 Is the advertising industry facing a brain drain?

62% of industry talent has interviewed outside adland over the last 12 months, according to a new report from Impero – and the majority of us only intend to stay in the industry for 2-5 years. But it might not be for the reasons we expect. Burnout, mental health, a lack of diversity and poor work-life balance have been at the centre of the debate surrounding the advertising industry over recent months.

But, when asked to anonymously name one thing they would change about the industry for Impero’s ‘Rebranding Advertising’ report, none of these issues came in top.

The majority of respondents (24%) said they would change the work and that “creativity needs saving”.

“Working with creative people on creative projects” was also the top reason most respondents chose a career in advertising in the first place – with 58% of respondents citing this as the thing that attracted them to the industry.

The lifestyle and the money came in in joint second place, at 51%, and crunching numbers came in third, at 17%, showing our reputation as an industry of “mad men and maths men” still holds true.

The second most important thing to change about the industry was the culture, with 23% of adland talent responding “we need a fairer culture that is more reflective of the outside world”.

-    21% chose the hours, saying “we are trying to squeeze more and more work in for the same amount of money and people are working far too many hours.”

-    18% cited the business models as the thing they would change, responding “in an increasingly tech-led world, we need to up our game to stay relevant and future-fit.”

For its ‘Rebranding Advertising’ report, Impero also asked industry talent to anonymously share their views on issues including sexism, burnout, whether working in advertising affects people’s mental health, and diversity in the industry.

Sexism is still a problem in the industry, according to the survey: 36% of industry talent said they know someone who has been on the receiving end of sexist behaviour.

However, 25% of talent said sexism in advertising has changed for the better since they started working in advertising – and 21% said they have heard about sexist stories in the industry, but never in their agency.

25% of respondents cited burnout as a problem, saying advertising burns people out faster than most industries – however 26% said, although the industry does have a burnout problem, it is no worse than most fast-paced, high-octane industries.

8% of respondents said their agency culture does not accurately reflect the outside world. 5 out of this 8 responded that this lack of diversity “gets them down”. 2 of the 8 said “it doesn’t – but does it have to?”

However, it wasn’t all bad news for advertising. 60% of talent surveyed responded “yes” to the question, “If you were starting out in your career now, would you choose a career in advertising again?” 25% responded“maybe” and only 15% said “no”.

“These findings are a signal of something I’ve been saying for a long time,” said Michael Scantlebury, founder and creative director of Impero, the agency that commissioned the report.

“In order to avoid a brain drain of the best talent to other, sexier industries like tech, we need to drastically increase our focus on making great work people care about. We need to make funny work, effective work, work that really reaches people, rather than getting lost in a programmatic bubble.

“When it comes to sexism and diversity – I think it’s frankly embarrassing that these issues still exist in such a supposedly progressive, open-minded industry: but it’s indicative of an old white boys’ club that has seen its day, and it’s good to see these issues are on the decline.

“Alongside making great work, protecting employees from developing mental health problems should be top of the agenda for agency bosses over the coming months. Reduce stress, improve the quality of the work we’re giving people – and hopefully the future of the industry looks brighter.”

Chris Hirst, global CEO for Havas Creative Network and author of ‘No Bullsh*t Leadership’ said: “As an industry, our single most important asset is the quality of our creative talent – our very survival depends on it. Talented people have always had choices – even more so with the pace of disruption today – so we clearly need to work harder to hold onto them.

“This means creating a culture which attracts them, as well as laying out clear career paths to hold onto them. Those career paths will be far more diverse today than they once were – some people will want more opportunities for learning and progression; others more flexibility to focus on outside pursuits; and, in age of great uncertainty, others will want more reassurance and support.

“Building an environment which flexes around the diverse needs of those very different individuals – where people feel there’s something in it for them as well as us – will be central to keeping us future-fit.”

Josh Krichefski, UK CEO at MediaCom, said: “Advertising is an attractive industry which appeals to many. But we’ve relied on that for too long. We’ve haven’t always made the most of people’s talent or taken care of them enough and this has been heightened by the way our industry has transformed. Advertising provides diversity of skill sets and career paths – but we need to help grow people’s skills and nurture our people to unleash them.

“Similarly, we must address the mental health challenge in our industry. As exciting as the media is, there is a high-pressure ‘sink or swim’ mentality often celebrated which is damaging to our people and our industry. If we’re going to attract and retain talent, we need to fix that and make sure people know as an industry we are dedicated to doing so.”