Do Brands Belong in Music Videos?

LBB's Laura Swinton on the hot debate at the inaugural MusicVidFest 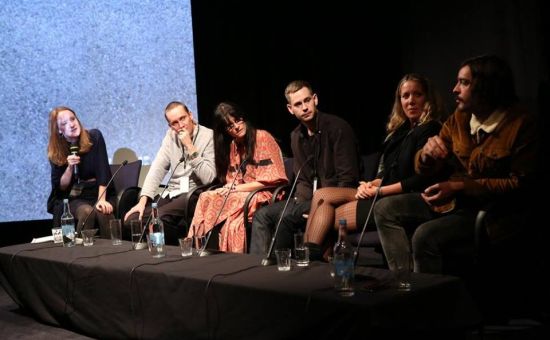 This week saw the inaugural MusicVidFest at the BFI in London. Organised by the brains behind Bug, the UKMVAs and promonews.tv, it was a chance for producers, directors, commissioners and artists to get together and thrash out the issues facing the industry. Unlike advertising, music video doesn’t have an endless circuit of conferences and so it was a unique chance to gauge the health of the promo and find out where it’s heading. The panel I hosted, the producers’ panel, was a chance to drill down into the business of making music videos. One of the biggest debates of the day was the growing role of brands in music videos.

The tension between the pure creativity of promos and commercial interests and creeping brand involvement was a recurring theme that cropped up in several panels. Let’s face it, these days no one makes music videos to get rich; budgets might be inching the teensiest bit higher as the economy recovers from recession but we’re nowhere near the megabucks '90s. And that means that production company EPs and MDs are having to find new ways to balance the books.

Making money on commercials and using that to support music video production is nothing new*, but it’s now nigh on impossible to stay afloat making nothing but promos. Some people have separate music video ‘wings’ or ‘sister companies’, while others use the same platform for both but however they achieve it most have found a symbiosis that works for them. Plus the blend of commercial and creative activities is healthy. Music videos allow production companies to nurture young directors in the hope of staying fresh, relevant, and attractive to ad agency creatives and producers. They give more seasoned hands a chance to break out, experiment and renew their passion for film-making. And commercial work gives new talent something to aspire to and the opportunity to work with the finest craftspeople in the production industry. And hopefully there’s a bit of cash in it too.

Where things start to get trickier is brands’ growing involvement in promos. It can take the form of everything from product placement to wholly sponsored videos. And then there are things like Mirriad, a technology that allows advertisers to slip ads into promos, new and old, switching them in and out at will (I don’t think I’m alone in finding this very, very unsettling).

The question of brands getting involved in music videos triggered quite a debate amongst the panellists. Some, like Danielle Hinde of LA-based Doomsday Entertainment, were relatively comfortable with the idea – product placement seems more prevalent in the States than the UK. Others, like Prettybird’s Juliette Larthe and Able & Baker’s Joe Walker felt that it was a question that had to be dealt with on a case-by-case basis. Are the inevitable compromises worth the extra money? Is it appropriate for this video? How does the director feel? How much creative control would we have to give up?

But Division Paris’s Jules De Chateleux was having none of it. If music video is the creative release for directors and producers, isn’t that something sacred? What’s the point of doing them if freedom is curtailed and the on-set environment feels just like you’re shooting an ad? He argued that more often than not the amount of money offered by brands for placement in videos was so paltry as to not be worth the added stress and compromise.

Somesuch’s Tim Nash took a balanced view of the whole issue but did raise the point that brands often mean sets clogged with marketing directors and the sort of bureaucracy you’d normally associate with an ad shoot. And if that’s the case – and you’re essentially advertising something within the video – Tim noted that it’s pretty dubious that production companies in that situation tend not to be paid full APA rates.

Later in the day, on the directors’ panel, the question was raised again. And again context was king. Some tie-ins make sense, some don’t. For every poorly prepared and clumsily inserted close up there’s a fashion brand donating gorgeous clothes or a make up brand offering to do all the make up for free. There seems to be no industry standard for working brands into videos so there were a few horror stories from the directors too – not least being asked, last minute, to include close-up product shots when there were no macro lenses available.

One of the biggest concerns for brands hoping to get in on the act has to be effectiveness. As a category, music video generates among the highest numbers of views and shares, coming just behind comedy and educational videos. So, in terms of eyeballs, hooking up with a popular artist makes sense. But on the other hand competing interests can result in mixed messages. Ultimately the aim of promos is to push a particular artist or song. Next in the hierarchy, there’s a production company aiming to make a creative platform for their director to shine. Throw a couple of brands into the mix and where’s the clarity? That’s not to say it can’t ever work – the new OK Go video, Honda’s Uni-Cub motorised unicycles were integral to the whole concept and it kind of worked. Well, it certainly had me hankering for one of my own. And then there are brand-owned platforms like Nowness, owned by LVMH and hungry for exclusive, creative content – it’s hard to deny that the brand has benefited from collaborating with cool and interesting filmmakers.

There were no definitive answers on the issue at MusicVidFest, but rather a vibrant mix of opinions. Being the first year of the festival, the event was more about opening up dialogue and asking questions rather than necessarily finding answers. It was about looking to the future and laying a foundation for future years. And the question of brands in promos – alongside other issues raised on the day like diversity, censorship and technology – look set to provide plenty of fodder for some time to come.

*In the creative family tree, music video and advertising are disaffected siblings. Swotty oldest child, advertising, played by the rules, got a good job, spawned a few kids (or quite a lot of kids if the ever-growing brood of award show categories is anything to go by). Music video, the younger, didn’t. It gets away with the sort of thing advertising can only dream of. It’s more reckless, more creative, more vibrant… although it does have a habit of just turning up at advertising’s house, expecting to be able to crash on the couch. Still, it gives advertising a hit of vicarious cool and it means music video has someone to bum 20 quid from. And when literature and art house cinema start to get drunkenly condescending at family weddings, I like to think music video and advertising have got each other’s back.