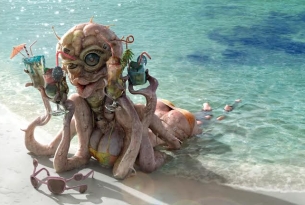 The three execution campaign features germs like you’ve never seen them before, in instantly recognisable holiday poses, relaxing without a care in the world. Unknown to the germs, looming in the background is Domestos ready to bring their holiday to a gruesome end.

This standout brand campaign from Domestos sits within the long standing ‘Showdown for Germs’ campaign. Rik Strubel, Global Brand Director for Domestos explains: ”the Showdown campaign has been a hugely successful vehicle for our TV executions. With Holiday’s Over we aimed to bring some of the magic of our Germworld into other channels. Working with the animation team at Illusion we had the opportunity to really bring these undesirable characters to life.”

In ‘Holiday’s Over’ we see three typical holiday posed photos, but rather than our friends and family we’re used to seeing, it’s stunningly realistic gruesome germs relaxing on holiday. There’s the ubiquitous grinning underwater camera shot in ‘Selfie’, the germ couple floating on the water in ‘Lilo’ and the bikini clad germ lying in the surf in ‘Duckface’. In each scene, the threat of Domestos is in the background reminding us that without Domestos germs live free and holiday in our toilets.

The brilliantly captured germs were designed by award winning CGI design studio Illusion based in Bangkok. The team at Illusion won Cannes Lions for their work for WWF in 2014 and D&AD for Unilever brand Sunlight.