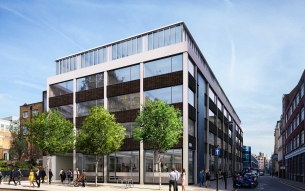 DLKW Lowe has announced its move from South Kensington to City Road in Shoreditch.