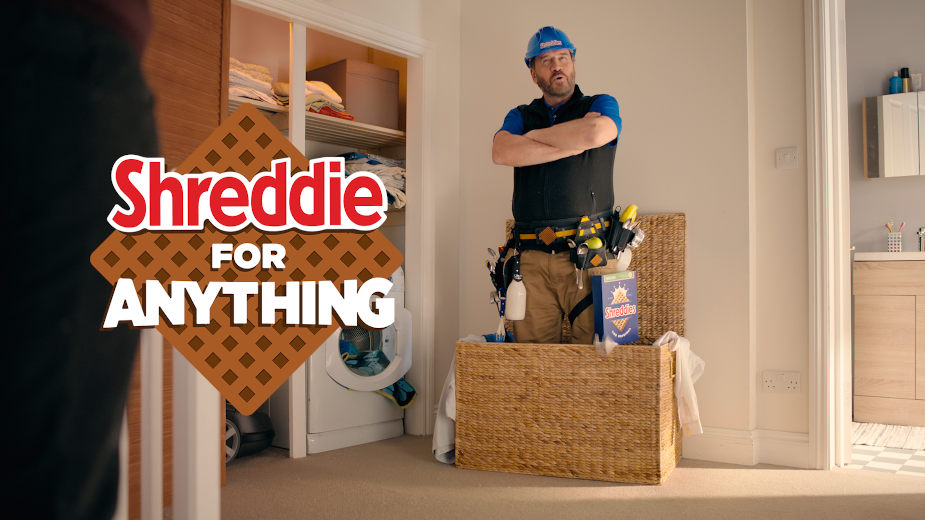 Nestlé Cereals has launched a bold, new UK campaign created by McCann London aimed at empowering British families to be ‘Shreddie For Anything’.

Shreddies turned to the only man that can captivate an entire nation to re-establish the classic British breakfast cereal. Some say he built Milton Keynes in a week; others say he does not believe in scaffolding. Nick Knowles, TV presenter and builder of dreams, is waking up the nation with his can-do attitude and celebrating the UK’s ordinary, no-nonsense families who are tackling life’s everyday challenges head on.

In the 30 sec TV spot, Nick ‘get it done’ Knowles comes armed with his belt of tools, packs of Shreddies and words of wisdom: “when things get tough, don’t eat soft” to help a dad get through the daily struggle of getting his kids up for school.

Toby Baker, regional marketing director UK, Nestlé Cereals, commented: “We’re proud that SHREDDIES has continued to be a staple brand in the cupboards of families across the country since 1953, giving them what they need to unlock morning energy to start the day. This marks an exciting new chapter for the brand, and we’re delighted to partner with Nick Knowles, who we believe truly embodies the ‘no-nonsense’ attitude needed to help families get ‘Shreddie for Anything’ in the morning.”

Greg Mullen, creative director, McCann London, said: “Mornings are a struggle whatever yours looks like, and that’s why we wanted to smash through it with a campaign that’s packed full of ‘get-stuff-done attitude’. And who better to turn to than, arguably, the UK’s answer to Chuck Norris, Nick ‘Get It Done’ Knowles. He’s the embodiment of Shreddie For Anything, after all, world leaders come to him to build their bridges!”

Nick Knowles, said: “I’m Nick Get-it-Done Knowles. I get up 10 minutes early, just to wake up my alarm. That’s why Shreddies came to me as I get stuff done. I know that everyone faces their own everyday challenges, from parenting in a pandemic to ticking through the to-do list. A dependable breakfast of Shreddies can set anyone up to dominate their day.”

Project Name: Shreddie for Anything